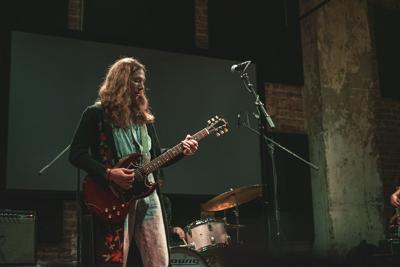 In Public Universal Friend’s music video,“Tomboy,” a snowy 100 Acres serves as the backdrop and scans scenes around the lake and woods in stark black and white. The video, “Firestarter,” features the band’s lead singer, Jody Friend, skateboarding in an otherwise empty Garfield Park. And in “Heather,” the viewer will recognize the autumn skies and ruins of Holliday Park.

In each of these videos, and on Public Universal Friend’s new album, Perennials, we are reminded of our own memories around Indianapolis and how these places not only hold individual significance but help to create shared narratives across the city.

Public Universal Friend’s first full length album Perennials traces the transformative narrative of its founder, Jody Friend. During the last year she has taken a break from performing, due to COVID-19, and spent some time searching and found plenty. Friend came out as transgender, went through a marital split, reconsidered faith, and wrote an album about a life upended.

Self-produced, the music ranges from neo-folk to hip-hop soliloquies and is rooted in Friend’s lyrics and voice. Having arrived in Indianapolis in 2015, Friend has found a home in the community of creatives that drive and support her. At the least, Friend sees Perennials as, “an anthem of freedom for a unique take on the twenty-something closet exodus.”

The album and Friend’s message, however, achieves much more. PUF shares the challenges and rewards that accompany the reconfiguration of a life. Through the music the listener might be reminded of what makes any life happy, and how the communities around us support and enrich our individual, and collective identities.

Perennials is an ambitious project and Friend would have it no other way. She proudly admits that the album is, “an unprecedented state of transformation, lending a dimension of hard-earned light to queer Midwesterners with a voice that has grappled through the fire of the tender center and lives to sing another day, with integration and joy.”

In response to NUVO’s request for a deeper insight into the project, Friend was more than generous.

NICHOLAS READING: In a way you haven’t described before, who is Public Universal Friend?

JODY FRIEND: Since I’ve been writing and performing music, my goal has been to facilitate a place of connectivity and authenticity between myself and listeners, beginning with the atmosphere of a live environment. There’s endless potential in creating a live space for listeners to be safe to be who they are and the artists that have made me feel that way are the ones to which I aspire. I was able to accomplish that to a degree for many years under a previous iteration, but since adopting the name Public Universal Friend, that potential has only broadened in its scope. The process of coming out of the closet and into myself has been positively instrumental in marking the tone of what was even possible with the music (lyrics, the l o o k, talks at the merch table, all of it) allowing a starting point of authenticity that is much more like reality than any sort of censorship I learned to resort to in the past.

READING: Your album, Perennials, is in your words “a deconstruction parable.” How does the work reflect your experience coming out as transgender?

FRIEND: Releasing Perennials was a surprising step for me as a writer because the further along I was with writing, it became increasingly apparent that it was no less than a coming out album. As I’m writing this today, it’s Trans Day of Visibility, a day I never saw myself being able to celebrate unless a lot changed in how vulnerable I was in my community, in my art, and within myself. Especially by the time I wrote “Firestarter,” the most recent addition to the record (written in March 2020), it was clear to me that coming out to the world as trans would be the riskiest admission I would ever allow myself to share with anyone and doing so publicly seemed of insurmountable risk. In spite of my anxieties, the reception among my listeners was magnificently encouraging and beautiful and that step was only made possible by leaning back into a community who I know support and love me for who I am. It was really then that I was able to come to terms with the fact that being Real in the world was beyond worth it. The “deconstruction” aspect of the album began with my faith in Jesus, in which coming to terms with my transness upturned so much of what I assumed about him. I wasn’t sure I would be wanted by anyone, God included. Turns out that being honest with myself by stepping into my transness is what allowed me to be loved in a way that I could actually feel. My hope is that PUF can facilitate that atmosphere to allow a similar narrative of radical acceptance to take place within the culture of the music.

READING: Your videos feature Indy backdrops in the skate parks and 100 Acres and Holliday Park. Could you talk about your creative process in its various mediums, and how the city has received you?

FRIEND: I place value on the act of creating because I believe it is the most direct path forward into connecting humans together. I have found music time and again to be a tool for real change in people’s lives. It reaches us where little else can, in which the meditative repetition, the religion of music making, the refining of the craft from an artist’s perspective is something that weaves these lyrics and melodies into our psyche. Most artists I know make art because we simply must. What I find to be ubiquitous among all art making is the importance of Doing the Thing. Hesitation or fear surrounding the Doing the Thing is often more defining for us than the Thing itself. As opaque as it may sound, the art life is one that spreads to all areas of the self; how we interact with those in our lives and the world around us, and these expressions are steps toward integrity of the self within a community. Sharing that process with others and validating their journeys I think is nothing less than the point of it all.

I moved to Indy in 2015 and have been falling more and more in love with the place. I find merit in embracing the scenery of the Midwest with the music videos especially, mainly because collectives of little people like us are how cities thrive or die creatively. What Indy needs is honesty about where we are: whether it’s in matters of race, income inequality, or trans liberation. There’s something potent about filming music videos for a trans rock musician in the heart of the Midwest. Every location we chose for filming (especially Newfields) had the intention of placing transness and diversity in places not often fostering inclusion to minority groups. All on purpose.

READING: To be grand, what does Public Universal Friend want to share with the world?

To be modest, what does Public Universal Friend want to share with the world?

FRIEND: At the risk of sounding operatic, I have no modest goals with the music. We’re aiming for nothing less than presence, connectivity, safety, and inclusion. My goals have been modest for most of my life creatively and it has earned me very little, often landing me places creatively that are built on compromise and people pleasing. By far the most beauty incurred through any type of art making for me has been doing and saying what frightens me, for the sake of honesty and the power of speaking truth into the world. When that’s done in love, I think anything’s possible.

READING: Can you share a bit about the band name? The American Revolutionary prophet plays a part, yes?

FRIEND: The band is named after a genderless Quaker prophet from 18th century America whose story was instrumental to me early on as I was figuring out the reconciliation between my faith and my gender identity. It was one of the first instances where I witnessed a gender nonconforming person of faith and it proved more than anything to me that Jesus and transness are not mutually exclusive from a theological standpoint. I believe it is instead a conversation whose paradigms are cultural and ideological but must be rooted in humanism and empathy in order to be fruitful. Part of my mission with PUF is to be visible, to tell my story, and to introduce a tangible human element to the Idea of transness. I think especially when faith / the divine / transcendence are a part of our narrative, there is a certain richness to the music's cultural role to be one that fosters representation, emboldening and celebrating the dignity and power so inherent to trans people within a paradigm of what some sects of Christianity are apt to vilify and exclude. Sometimes all we need is an example of what's possible in order to access it ourselves.

READING: What artists inspire you and have helped shape your new sound?

FRIEND: This last album had me coming out of a massive Fugazi kick, which really inspired the last album, along with Switchfoot, Pearl Jam, Nirvana, and basically all the big rock bands I listened to in high school. This album revealed itself to be something much more nuanced and dynamic than what I had ever done previously, and this is chiefly because of the bands I can cite ad nauseam  that affected my writing for the three years it took to write Perennials, including: Radiohead, Pinegrove, Julia Jacklin, Big Thief, Pixies, Hop Along, Alicia Keys, Corinne Bailey Rae, Better Oblivion, Built to Spill, and Slow Mass, among various other sonic textures and moods that love based in everything from trap beats to spoken word. The idea has been to continually integrate all the kinds of music I love into something I want to share; something I'd want to see live. I’m excited to see where that untethering of reliance on genre standards takes PUF into the future.