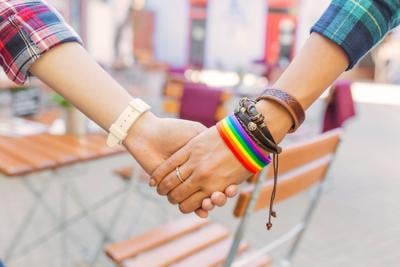 As many in-person Pride events have been canceled because of the COVID-19 pandemic, a group of political leaders and activists have launched “Wave Your Flag With Pride” to encourage the public to wave rainbow-colored flags and participate in online LGBTQ events.

Members of the movement want to stir excitement for and awareness of the Indy Pride event that will take place online from 2 p.m. to 10 p.m. on June 20. Usually, there is a day-long festival with a parade, but the pandemic makes that impossible. The goal is to show Hoosiers that while they are unable to physically come together to celebrate Pride month, they can still connect and unite with others who are part of the LGBTQ community.

This June’s Pride month is especially important, said Drew Anderson, board member of the Stonewall Democrats.

June marks the 51st anniversary of The Stonewall Riots in New York City in 1969 that sparked the LGBTQ rights movement. Anderson said that the Indiana Stonewall Democrats, a group made up of Indiana Democrats who advocate for gay rights, support black and brown LGBTQ members of color. He stressed the importance of showing solidarity with the black community in this time of civil unrest.

Ford is the first openly LGBTQ Indiana state lawmaker who also works closely with the Indiana Stonewall Democrats and Shelly’s Voice, a  group created to advocate for LGBTQ rights after Shelly Fitzgerald was fired from Roncalli High School for her same-sex marriage.  He expressed sentiments similar to Anderson’s.

“A lot of the freedoms and rights, the progress we’ve made has always included our black and brown siblings,” Ford said. “The month of pride has to be centered around black and brown people, and lifting them up, and lifting their voices up, and putting them front and square because it’s not until we do that as a community [that] we can get some real progress and some real change.”

Ford said that especially with the pandemic showing the health disparity that people of color have faced, and now with the protests that were sparked by the death of a Minneapolis man at the hands of a police officer two weeks ago, Pride month this year should be focused on black members of the LGBTQ community. He discussed his desire to advocate for black transgender women, who face high levels of violence, in new hate crime legislation he said he plans to propose the 2021 session of the Indiana General Assembly

In addition to the Pride promotions, the Stonewall Democrats on Wednesday will begin an initiative to encourage LGBTQ Hoosiers to register to vote. Over 20% of LGBTQ citizens of the U.S. were not registered to vote in 2018, according to one study. The Stonewall Democrats want to lower that number, and they stressed the importance of LGBTQ Hoosiers making their voices heard

Visit the official “Wave Your Flag With Pride” Facebook page to request a flag delivery or to find details about pickup locations. To stay up-to-date on the details of the virtual Indy Pride celebration, visit IndyPride.org.

Andrea Rahman is a reporter for TheStatehouseFile.com, a news website powered by Franklin College journalism students.