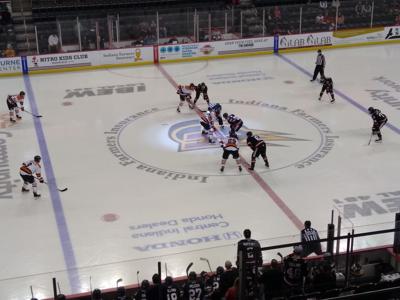 The Indy Fuel were playing with a lot of momentum at home in the first two games against their in-state rival with two wins to their name. However, the Komets have found their stride as of late and have been playing with rhythm, physicality and offensive fireworks.

Fort Wayne's finest hockey club found themselves behind the eight-ball, starting the season later than all other teams in the ECHL with a February start due to COVID restrictions. But they came out flying and were knocking them all in Saturday night as they put up an 8-1 mark in a flashy victory against undefeated Fuel goalie Dan Bakala in regulation. Eight goals is enough to be a record amount the Indy Fuel organization has ever given up at home in franchise history.

Sunday, Feb. 28, the Komets looked to drain the Fuel again with a vengeance as Indy played their 8th game in 12 days on tired legs and spent skates.

Ft. Wayne came out chomping at the bit trying to win their first back-to-back road wins of the 2021 campaign with a flurry of shots on Fuel netminder Billy Christopoulos(6-3) to jumpstart the game. It only took 3 minutes for the Komets to put their stamp on this game early.

Winger Anthony Nellis received a pass in the attack zone face-off circle and proceeded to backhand deke the Indy keeper to fake him out before depositing the biscuit in the basket and leave Christopoulos hanging in the splits as the red light turned on. The Fuel had a tie on their mind when forward Diego Cuglietta almost came through as he rang a hard slap shot off the far post at 14:07 left in the period to barely miss the mark versus Komets goalie Louis Guindon (1-0-1).

Indy just wasn't getting enough rubber on the net with only 8 shots through the first half of the game. However, Indianapolis enforcer Cedric Lacroix tried to uplift his team by checking Komets forward Matthew Boudens hard into the blue line boards with 1:50 remaining. The intensity was building as the players attached to each other and circled around before Lacroix threw Boudens to the ice and pummeled him with a few rapid-fire punches to the delight of the home crowd.

Fuel goalkeeper Billy "The Squid" staved off a series of point-blank chances by the Komets with a minute left in the first period and wasn't getting a whole lot of defensive support. Christopoulos and the Fuel were lucky to only be down one score after the first stage in front of the cage as Ft. Wayne had pride on their side to the tune of 13 shots on goal.

Four minutes into the second period, Ft. Wayne was looking for insurance and found it for their 2-0 lead when Justin Vaive whirled around the face off circle and rocketed a wrister over the glove of Christopoulos into the top right corner of the net for his 3rd tally of the season unassisted on the play. 237-pound Vaive would try to light the lamp again later in the period with 5:14 to play when the Komets had a three on one surge.

Fuel goalie Billy "The Squid" was facing a storm of pressure all game when he held off the lopsided attack and steered Vaive's shot away with a kick save into the corner to keep  Indy within striking distance. Once again, Christopoulos had the goods a minute later when he stacked his pads and kicked away a breakaway attempt all alone by Ft. Wayne's Shawn Szydlowski.

Eventually, the defensive dam would break for Indy goalie Christopoulos and his 92% saving percentage for the season. With 2:22 left in the 2nd period, Komet's Jackson Leef would elevate a strong snapshot over Indy’s netminder’s blocker to make it 3-0 and put the game on ice with Anthony Nellis picking up his 2nd point of the game on the assist.

Indy Fuel fan Jay Scott from Section 313 had some positives to take away from a challenging game to watch as he mentioned, "The power play kill was very effective and the boys hustled the whole game, but just couldn't get any breaks this afternoon."

The Indy Fuel have been terrific all season long by erasing penalties at an 82% clip when getting their hand caught in the cookie jar and going to the box, which ranks in the top half of this competitive league. Fort Wayne has been full of crafty veterans for years that know how to draw penalties and are really starting to come together as a force in the ECHL as they obtained their fifth win in the first nine games and came away with 26 shots on goal to Indy's 19 on this dominating shutout away from home.