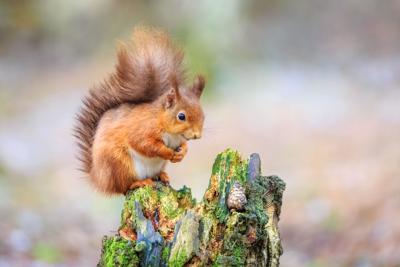 For over a year I’ve been entertained by a red squirrel of indeterminate gender as (he? she? they?) has determinedly taken over our deck.  Red squirrels — better known as “pineys” in our household — are small and storybook cute, with bright, searching eyes and nimble front paws.  They are also hyper quick, seeming sometimes like cartoon versions of themselves.  Then again, our squirrel has a contemplative side. We will see…okay, her…meditating on the same narrow branch of a maple tree beside our deck, tail curled over spine, or thoughtfully grooming herself, at least once a day, often more.

This squirrel must think she’s found the promised land.  We feed the birds and so there is a fulsome supply of food. She claimed this territory for her own at some point last spring, when she started chasing the bigger black and gray and fox squirrels away.  Though small, she was adamant.  After running her cousins off the place, she would sit and cackle out a long, self-satisfied victory song.

Our piney is oblivious to the COVID-19 pandemic.  As the number of confirmed cases in Indiana mounts, this squirrel goes about her daily routine; eating, meditating, taking cover when the weather’s bad.  The Franciscan friar Richard Rohr has likened the current crisis to an initiation rite, an arduous passage through which we may be led to discover our essential selves.

Piney may not be affected by the virus, but her sense of self may be undergoing a similar test — another piney.  It took me awhile to realize we had not one but two red squirrels around the deck.  By all appearances they look the same, so, at first, it was like a comic mirror bit, where two people do the same thing until one of them gives the game away.  Maybe it was like this for our original squirrel.  Perhaps she saw her other and, for a moment, thought she was looking at herself.

Squirrels, of course, have no use for toilet paper, but I wonder if our piney’s been hoarding other stuff in light of this new arrival — cracked safflower shells, say, or scabs of maple bark.  She has not, as far as I can tell, attempted to chase this interloper away as she did with all the other squirrels.  No, thus far there seems to be a piney rapprochement.

Things can change quickly out there.  Last fall a feral cat briefly hunted around our house.  At dusk one evening we watched as the cat climbed onto our deck, a red squirrel dangling between its teeth.  We were momentarily stunned by what we feared was the loss of our neighbor.  Then, a couple days later, piney was back, sitting on her accustomed branch, surveying her territory.  The cat was the one that disappeared.

As I write this, the squirrel is perched on one of our birdfeeders, filling herself with white safflower seeds.  Exactly which piney this one happens to be I cannot say for sure.  He? She? They?  Like each one of these passing days, this one may be different, yet the same.