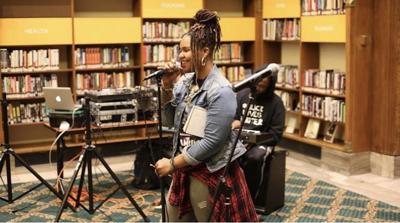 With her monthly That Peace Open Mic event, local emcee and poet Mariah Ivey strives to provide a place for organic community building.

“That Peace represents community, with an emphasis on unity,” Ivey says. “We created the open mic as a safe space to celebrate all art forms and all genres of music.”

The first-ever That Peace fall festival has a name that reflects its intent.

“Ubuntu is an African proverb,” Ivey says. “It means, ‘I am because we are.’ It places this emphasis on the importance of community and our responsibility and obligation toward how we interact with and treat one another. It brings the importance back to seeing ourselves through each other.”

The first annual Ubuntu Fest will take place on Saturday, Oct. 26 at the Tube Factory in Garfield Park. The evening event will feature fresh food, live music, and a yoga session, showcasing some of Indy’s local artists and vendors while also putting an emphasis on self-care. Acts performing at the festival include Allison Victoria, Clint Breeze and the Groove, Diop and Mandog, and KMelody.

Ivey originally started That Peace Open Mic in July 2015, hosting it at Write-On the Poetry Spot. After outgrowing the initial location, the monthly event moved to Fletcher Place Arts and Books before eventually winding up at the Central Library.

“They had just launched the Center for Black Literature and Culture, so we moved it there about a month after their official launch,” Ivey says.

In staying true to its mission, That Peace Open Mic has been shaped by the community over time, with elements of health and wellness gradually making their way into the picture.

“We emphasize wellness, creativity, and community building — all of the above,” Ivey says. “If you’ve come to That Peace, you’ve seen that we try to feature one to two vendors each month, and those vendors are primarily within the health and wellness sector of things.”

“I want people to leave knowing they have options here in the city,” Ivey says. “Whatever it is, they can shop with local people here in our city.”

From 6 to 6:30 p.m., Charlie Redd of Haven Yoga Studio will also lead a yoga session at Ubuntu Fest.

“We want folks to leave knowing that they should prioritize self-care,” Ivey says. “For those that have never done yoga before, this is an opportunity for them to try it out.”

The Irresistible Voice of Allison Victoria

Talking with Mariah Ivey, Host of That Peace

The Future Is Bright for Diop

Started by Mariah Ivey in 2015, the monthly event has a foundation rooted in community, culture and Black empowerment.

With 10 years of whimsical exploration under their belts, the Indy artist collective is set to present Optical Popsicle X at The Cyrus Place.