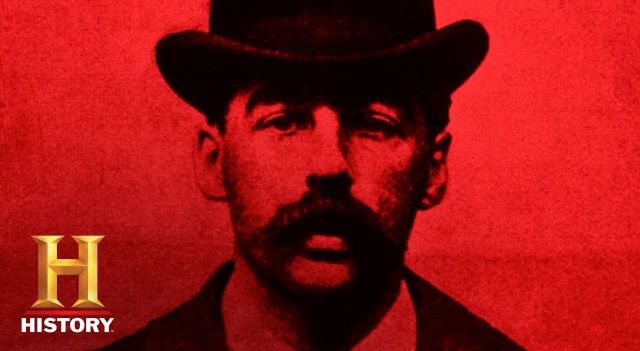 Still of H.H Holmes from American Ripper. (Image via IMDB) 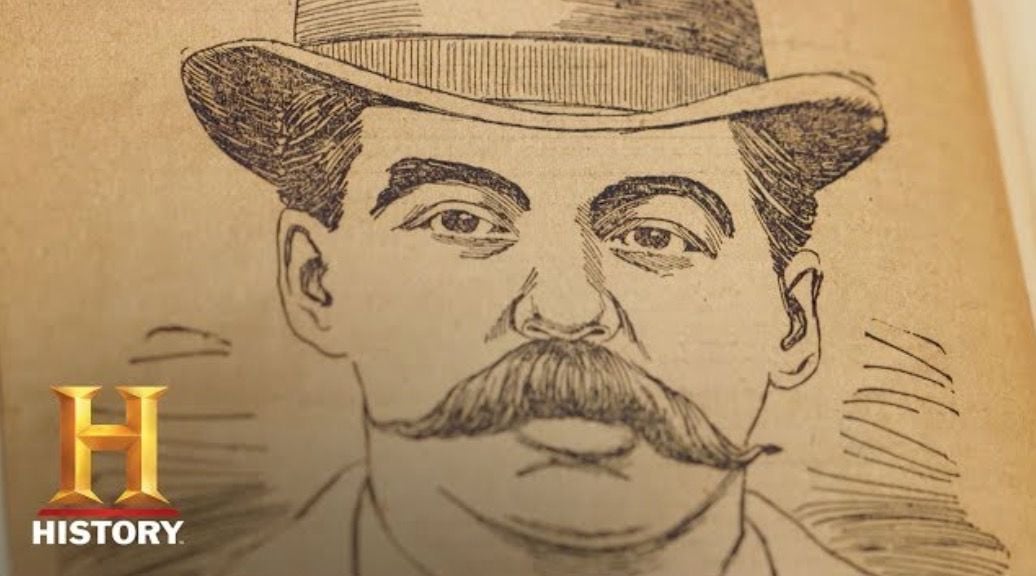 Drawing of H.H Holmes from American Ripper. (Image via IMDB)

You may know him as the man that terrorized Chicago during the 1893 Chicago’s World Fair, or as the cunning con-man that charmed countless people out of their money -- or,worse, their lives. Herman Webster Mudgett, alias H.H. Holmes, was America’s first serial killer, and had ties to the state of Indiana.

1.) His fascination with death started as a child

In his hometown of Gilmantown, New Hampshire, a young H.H. Holmes would pass by the local doctor’s office every day on his way to school. Rumors, spread by his schoolmates, that the doctor kept preserved heads and organs in his cabinet terrified Holmes. After school one day, two boys dragged a screaming 11-year old Holmes into the doctor's office and the doctor came rushing to Holmes’ rescue. Ironically, historians cite this incident as the beginning of Holmes’ fascination with anatomy and medicine. This fascination led him to conduct his early medical experiments on salamanders and frogs, before evolving to larger animals like cats and rabbits, and eventually, other humans.

2.) One of his first kills is believed to have been a childhood friend.

Unsurprisingly, Holmes didn’t have many friends growing up. Spending most of his time “operating” on living animals, Holmes shared his souvenirs from his kills, including rabbit skulls and cat paws, with just one person. Tom, an older boy from the neighborhood, was Holmes’ only real companion. Tragically, Tom fell to his death from an upstairs landing while exploring an abandoned house with Holmes.

3.) He got his medical training from the University of Michigan

In 1882, Holmes enrolled in the University of Michigan’s Department of Medicine and Surgery. During his time at the college, where he graduated from in 1884, Holmes regularly took his work home with him. The eager medical student reportedly took cadavers used in his study back home to finish what he started in class. Naturally a conman, Holmes was also known to disfigure the cadavers in an attempt to claim insurance over the unidentifiable corpses.

4.) Some believe that he could have been Jack the Ripper

If being America’s first serial killer isn’t a heinous-enough title, some researchers believe that Holmes also perpetrated the most famous cold case in modern history. A murderer dubbed Jack the Ripper terrorized the streets of London from 1888 to 1891, disemboweling an estimated five women in public spaces. Although many people were questioned in relation to the crimes, no one was ever charged. Jeff Mudgett, the great-great grandson of H.H. Holmes, believes that his ancestor was responsible. After learning about his family history twenty years ago, Mudgett began researching all he could about Holmes, and discovered what he believes to be links between The Ripper and Holmes. From boat liners found listing an “H. Holmes,” sketches created from eye-witness testimony to a Ripper murder, medical training apparent in the Ripper murders, and letters written by Jack the Ripper that forensic linguists believe prove the Ripper was an American pretending to be British, Mudgett’s theory is getting a newfound attention thanks to the History channel’s mini documentary series American Ripper.

If Jeff Mudgett’s theory is correct, he will have solved the most notorious cold case in history.

5.) He created a real life house of horrors

In the fall of 1888, Holmes began constructing a three-story building at Sixty-third and Wallace in Chicago. The building wasn’t finished for six months, largely because Holmes hired more than 500 men to work on the building. Most were fired after a few weeks on the job, likely to keep builders in the dark as to the sinister plot that they were helping to play out. While the first floor consisted of shops, and the third office space, the second floor was nothing but rooms for rent, which Holmes used to systematically murder anyone who checked in. With soundproof rooms, doors that locked from the outside, and gas pipes that were controlled from Holmes’ office on the third floor, unsuspecting guests didn’t stand a chance against Holmes. After knocking them unconscious in the gas chambers disguised as hotel rooms, Holmes’ dumped their bodies through a greased chute, a feature of all the rooms, that led to the basement. There, his victims were dissected and their corpses thrown in a vat of acid. It is believed that many of Holmes’ victims in the “Murder Castle” wound up having their skeletons sold to medical schools, making it impossible to adequately estimate the number of people Holmes killed. Beyond that, the hotel was open for business during the 1893 Chicago World Fair, which drew over 750,000 people. Newspaper reports from the period that Holmes’ resided in Chicago estimate that around 800 women went missing.

6.) Two of his three wives were from Indiana

Not only did Holmes kill the 10-year old son of his partner-in-crime on Indiana soil, he also married two Hoosier natives. Well, not exactly. Holmes never officially divorced his first wife, Clara Lovering, so his other marriages weren’t legally binding. Nonetheless, Holmes met Emelind Cigrand, a 24-year old stenographer from Lafayette and quickly hired her as his private secretary. They were engaged by December of 1893, although Holmes had no intention of going through with the ceremonies. Holmes locked Cigrand in a walk-in vault and sat outside the door, listening to her cry for help until she eventually suffocated. It is believed that Holmes sold her skeleton to a local medical school. Holmes’ third “wife,” Georgianna Yoke, was far luckier than most women that crossed Holmes’ path. Not only did she survive, she played a key role in putting Holmes behind bars after a lifetime of fraud and murder. Yoke, a native of Franklin, testified against Holmes after he became the sole suspect in the murders of three children of Benjamin Pitezel, Holmes’ partner-in-crime and one of his many victims. Despite Holmes’ argument that Yoke couldn’t testify against her husband, Yoke discovered the man who she thought was her husband was still married to the woman he married in 1880, and needed no persuading to take the stand. Yoke’s testimony that Holmes rushed to leave Philadelphia on the night that Benjamin Pitezel was killed helped the prosecution secure a guilty verdict, and Holmes was sentenced to hang in the gallows of Moyamensing Prison in 1896.

7.) His execution was far from ordinary.

After being sentenced to hang for the death of Benjamin Pitezel, Holmes quickly became a celebrity from this jail cell. With journalists coming to hear his story, and having access to pens and paper, Holmes’ wrote his memoir and final confessions while in jail. In his writing, Holmes confessed to murdering 27 people. However, several of the people he named were alive and well at the time of his execution. On the day of his hanging, May 7, 1986, Holmes reportedly told the executioner: “Take your time, old man.” And, he did. While death is typically instant during a hanging, due to the neck breaking, Holmes’ neck never snapped. Instead, witnesses to the execution reported him twitching for 15 minutes. He was pronounced dead 20 minutes after the trap had been sprung.

Although he wasn’t perturbed by senseless violence or dissecting bodies, one thing really freaked out H.H. Holmes: grave-robbers. Fearing that his body would be dug up after his death (maybe disfigured and used for insurance fraud?), Holmes had very specific instructions for his interment in Holy Cross Cemetery in Philadelphia. Holmes’ coffin was laid in the middle of two plots that he purchased. In the event that a grave-robber was able to find his grave, despite not having a headstone, Holmes requested that his coffin be buried under 10 feet of concrete. The odd request was granted, and Holmes’ grave was left undisturbed….until earlier this year, when his body was exhumed for DNA testing for “American Ripper.”

9.) Several people involved in his trial and execution wound up dead of mysterious or violent causes

Known as the “Holmes’ Curse,” peculiar incidents resulted in the deaths or misfortune of those who participated in the last days of H.H. Holmes. The trial judge nearly died from an unexplained illness, the superintendent of Moyamensing Prison committed suicide, the jury foreman died in an electrocution, a man who testified against Holmes died of blood poisoning, and a priest that attended Holmes’ execution and who provided spiritual counsel was found beaten to death in the street.

10.) Some believe that he escaped his execution

Beyond the heinous murders that he committed in the 36 years he lived, Holmes was also a notorious con man. Could he have pulled off the greatest con of all time? Despite the execution being open to the public, a theory exists that Holmes’ walked away. The attending physician in Moyamensing Prison wrote in an article in the Journal of American Medical Association: “the pictures of Holmes published in the daily papers and in his book do not, to my mind, portray the features of the man I saw in the cell.” In regards to the exhumation earlier this year, where DNA from the body in Holmes’ grave supposedly matched DNA from Jeff Mudgett, Mudgett isn’t completely convinced. Because the DNA from the corpse was degraded DNA, Mudgett wants to take DNA samples to a lab that specializes in degraded DNA in order to get a second opinion.