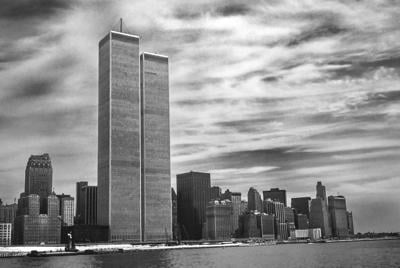 Why can’t you recall where you put your car keys just now but you recall significant events in your life like it was yesterday? It probably has something to do with the emotional resonance of the memory according to researchers.

I recall 9/11 like it was yesterday, but I recall feeling numb through much of it. I had been listening to NPR — not really reading Tolstoy’s “Master and Man” for an ethics class at IUPUI — when the first plane hit the north tower. I switched on the TV just in time to see the second plane crash into the south tower.

My then wife Katya, who I had just married, brought up the film Left Behind as we talked, as a frame of reference.

I was born in Manhattan, five miles from the World Trade Center. When I was ten, I took the elevator up with my parents and my sisters to the observation deck.  I recall being impressed by the monumental scale of the architecture. In 2004, in New York for a family funeral, my father and I took the Long Island Railroad into the city, to Ground Zero. I felt compelled to see it. At that time, of course, there was nothing to see. All the rubble had been removed, but no construction had begun.

I was talking about 9/11 with my daughter Naomi today and she said that COVID-19 is the 9/11 of her generation. Of course, it’s not just the pandemic that her generation will have to deal with.

This is a poem I wrote some time ago about that distant day, 19 years ago now.

The sky is a psychedelic chessboard

under which nothing can be taken for granted:

certainly not this train car carrying me at 200 kph

over the river toward the Kabul quarter.

It’s an industrial zone over there

with the smokestacks spewing filth into the air

over the urban renewal shantytowns

the domed mosques, and the casbah hangars.

The suspension bridge over the river,

on which the train slows as it nears the station,

connects neither ideology nor religion,

nor sense nor thought nor reason neither.

my ticket and crowns my skull with razor wire.

“Welcome to New Jerusalem,” he says.

“O ye of little faith,” I reply, biting my tongue.

In the casbah I stop at a falafel stand.

I’m telling the boy behind the counter

that I want extra pickles when a man,

seated one stool down, raises his head.

burn into me. “You’d better hurry up,” he says.

at me and walks off to the airport.

Where is it going? Is Atta inside?

The boy hands me my pita as the sky turns black.