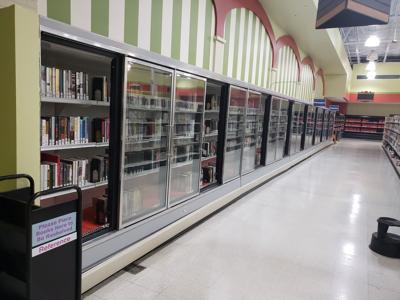 I’ve been back to the Carmel Clay Public Library four times since it reopened. You can find its temporary digs in a former Marsh supermarket, at 2140 E 116th St. as the Main Branch undergoes a $40 million renovation. When I went there for the first time on Oct. 14, I went with my daughter Naomi.

While Naomi picked out some graphic novels, I took a walk around. The children’s section was located in the former liquor section. The periodicals, I observed, were located in the former frozen foods section. (I need a freezer section in my brain to put my obsessive need to check the news on ice, as it were.)

As I wandered the aisles, I thought of my former workplace, Borders Books & Music. I recalled walking into that same retail space after its transformation into a Barnes and Noble. The last manager I worked for at that bookstore, a former supermarket manager, insisted books be shelved in strict alpha-order. So if you were looking in the literature section for a biography on Hemingway, you had to know the specific name of the author because the fiction-section-coded bios could no longer be found to the right of Hemingway’s literary works.

This manager also didn’t care much for keeping multiple copies of the same book in storage on-site. If he felt we had too many copies of a particular book, he’d have us ship it back. But the warehouse would reship those copies back to us. The manager, essentially, ran the bookstore like a supermarket, as if the books would spoil if they sat on the shelf for too long.

I lost my passion for browsing bookstores while working at Borders but I can’t pin all the blame on this aforementioned manager. When you’re dealing with books as so much product for 40 hours a week, the magic’s bound to wear off. George Orwell, in his 1936 essay “Bookshop Memories”, wrote about his time working in a London bookstore, a job which left him feeling unfulfilled. “Seen in the mass, five or ten thousand at a time, books were boring and even slightly sickening,” he wrote.

In 2011, Borders declared bankruptcy. The corporation was crushed like a cockroach under a bootheel, in part, because of its disastrous partnership with Amazon. But the rising tide of the internet, which made Amazon possible, and the advent of social media have crushed not just book retailers. The internet has also crushed our attention spans.

These days I find myself checking out many more books from the library than I actually read from cover to cover, which surely has something to do with my social media consumption.

A couple of days ago, I checked out Franz Kafka’s The Trial, probably his most widely read novel, from the temporary library. The Trial tells the story of a low-level bank clerk named Josef K. who finds himself charged with an unspecified crime, by an inaccessible authority. Usually, when people use the adjective “Kafkaesque” they’re referring to dense layers of bureaucracy, both impersonal and absurd, found in this novel.

Having read the novel two decades ago, I wanted to revisit it. I wanted to see if my impressions of the book were accurate, or if they had metastasized somehow. When I think of Kafka, I don’t just think of bureaucrats. I view it through the lens of my occasional inability to stop my own racing thoughts. Just like Josef K. was preoccupied night and day with his legal case, I have a tendency to get preoccupied with certain things. Looking through the book this morning, I was particularly struck by the character putting his best possible spin on the worst possible circumstances, as he wanders in and out of courtrooms, getting himself into even more trouble.

Lately, I’ve been preoccupied with Donald Trump’s refusal to concede to Joe Biden —  a move right out of Hitler’s playbook —  and his claim that Democratic (i.e. Black) cities stole the election for Biden. In Mein Kampf, Adolf Hitler wrote about the feats of marketing that you could accomplish by repeating big lies, the kind of lie no one would believe you just made up out of thin air. Hitler himself would surely be envious of Trump’s Twitter followers, who eat up his lies like manna from heaven.

As I write this, Trump and his allies are engaged in a multi-pronged attack to overturn the election results. If Trump succeeds, Nietzsche's notion of “the will to power” —  the desire to exercise raw power to dominate others —  will prove once again to be the most marketable idea on the planet. Is this where the so-called "marketplace of ideas" will deliver us? So much for the quaint American notion that transfers of power should happen as a result of free and fair elections.

The election has made me anxious, but perhaps there are things I can do, as far as self-care, that don’t involve diving into one of the darkest literary tomes of the 20th century. I mean, of all books at the supermarket library, why did I have to pick The Trial? Why couldn’t it have been something with a lot more action and a lot less anxiety? Like, say, Ken Follet’s Triple? Or John Grisham’s The Firm?

In the final scene of The Trial, when Josef K. is about to have his throat slit —  with the executioner sharpening his knife no less —  the protagonist cannot help imagine someone coming over the horizon to save him. This is not to be, of course, and K dies muttering the phrase “like a dog.”

Adult Swim at the Children's Museum

Hanukkah at Winterlights: Between OY & YO

"Latkes and Lights" at Newfields.