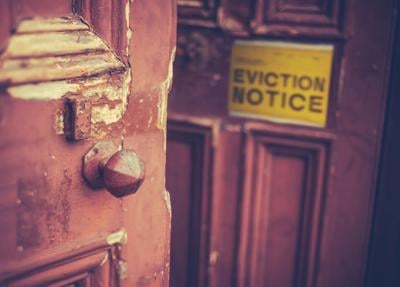 On a Wednesday evening in November, my husband and I were cleaning up the dinner mess, and trying to corral our kids upstairs for bedtime when I told him: “I’ll need you to take the kids to school tomorrow because I have to leave early to be at evictions court by 8:30 a.m.”

We’re long-time homeowners, so his response was warranted. Why on earth was I going to evictions court?

It’s because I’m a researcher, and it’s my job to understand how people experience the world, discern patterns, and help society solve some of our most pressing problems. Typically, I attend public meetings and events in communities where I am doing fieldwork. Since I was in the middle of a research project on housing instability in Marion County, this involved going to evictions court. Indianapolis, coterminous with Marion County, has the 14th highest eviction rate in the U.S. with over 30 households evicted every day, disproportionately affecting low-income communities of color.

In Marion County, eviction proceedings take place in small claims court, where an average citizen can, without an attorney, bring a lawsuit to be heard by a township judge. The process is meant to be relatively quick, inexpensive, and simple enough so that anyone can access it. Small claims court in Indianapolis is for lawsuits where claims total $8,000 or less, although it strikes me that, for some people, $8,000 is not so “small” an amount. In fact, it’s more than half of what someone working full-time at the state’s $7.25 minimum wage brings home in a year.

I arrived that Thursday morning just a couple of minutes after 8:30 a.m., when the check-in process started. People were standing in line. Cases are heard on a first-come, first-served basis, so the earlier you get there, the sooner your case will be heard. If you’re last to sign in, you could wait 3 hours for your turn in front of the judge.

Inside, I found a seat on the perimeter of the courtroom, not only to get a good view and hear what was going on, but also hoping I could blend into the wall next to me. I felt conspicuous, recognizing my position of privilege as an upper-middle class white woman attending small claims court to observe the evictions process for a research project.

The room had a cold, institutional feel to it, and the chairs were uncomfortable. I noticed a well-dressed, youthful-looking white woman, maybe in her late 20s or early 30s, wearing a tweed blazer and a chunky jeweled necklace. She kept walking back and forth from the front of the room to the rear, organizing paperwork. The sound of her black pumps clicking on the hard floor seemed almost impertinent as they disrupted the hush in the room. She was an attorney who would represent several landlords, none of whom were present for their cases.

The judge presiding over this small claims court had previously told me that 105 cases were scheduled for that day, yet only 30 would be heard. The rest would involve no-show tenants, and judgments would favor the landlords who filed the evictions.

This is a clear legal imbalance in the rental sector: landlords aren't required to show up for the hearing resulting from their eviction filing. Instead, they can— and typically do — send their attorneys, who are well-versed in these legal processes. These attorneys are typically white, and arrive at evictions court dressed in suits and carrying leather briefcases.

Conversely, according to one judge, 90 percent of tenants are not legally represented, and, based on what I saw, they tend to be people of color who are struggling financially and facing eviction because they’re unable to pay their rent. Oftentimes, their income stream has been disrupted by job loss or an unexpected medical issue.

In court, there was an older Black man, maybe in his late 50s, who lost his union truck driving job and was struggling to find new work. The judge said the man might be able to get some assistance through a local social services organization or suggested the man could tap into his retirement to pay his rent. There was a case about an elderly African American woman who was on oxygen at Eskenazi Hospital, her adult daughter serving as her proxy in court. According to the daughter, black mold in the unit made her mother sick. The judge said maybe the daughter could talk to a social worker at the hospital to get connected to some resources. There was a 21-year-old Black man who lost his job about four or five months ago. His mother lived with him, although she was not on the lease. He couldn’t find new work and, together, they couldn’t pay the rent.

These renters probably weren't earning a living wage already, and lacked any real financial cushion. In each of these cases, the judge gave the renters about a week to either come up with the money to pay what they owed or to vacate their homes.

No matter the reason a tenant is short on money, if they can’t afford their rent they certainly can’t afford to hire an attorney to help them navigate an eviction process. And there is currently far too little capacity among nonprofits to provide legal services to the thousands of people who face eviction in Marion County each year, although the city’s new program supporting a legal aid hotline for tenants may help.

However, some judges do what they can to provide some balance. They may offer a summary of what will happen in evictions proceedings, they may encourage defendants to ask questions and give as much detail about their cases as possible, and they may share information about tenants’ rights.

During my observations in one courtroom, the judge showed a 10-minute informational video about representing oneself in small claims court, and then he spoke for 20 minutes to further inform renters on their rights. This judge also pointed out a table in the room with handouts on organizations providing free and discounted legal representation. He didn’t have to do all this. Judges sit on the bench to uphold the law, not serve as attorneys or case managers. But, recognizing that they operate within the framework of unjust state laws regarding the landlord-tenant relationship, some judges use their position to do what they can to soften the heavy blow that eviction can have on renters’ lives.

In the roughly 50 small claims cases that I saw over two days, only a few resulted in writs of possession, which allow the police to forcibly remove tenants who remain in units after an eviction order. Judges most often acted as mediators, asking tenants if they could somehow get the money needed to settle up on rent. If so, how long did the renter need? Did they want to pay and stay, or move? How long would they need if they wanted to move? Most tenants were given about a week to either voluntarily vacate or pay and stay.

On a county level, this dance results in slightly less than half of eviction filings converting into actual evictions, although the filing itself, which remains on a tenant’s record forever, can still make it hard for a tenant who wants to move. A lot of landlords don’t want to take a risk on a tenant with an eviction filing on their record.

What I observed in evictions court is emblematic of the larger landlord-tenant relationship in Indiana. Laws should ideally ensure a balance between both parties; but in reality, the rental space isn’t very fair or equitable. The state’s rental laws operate on the assumption that landlords are fully entitled to payments from renters, while renters are not fully entitled to quality housing. There is no state statute that enables tenants to withhold or escrow rent when a landlord breaks their part of the landlord-tenant bargain, which typically involves the landlord failing to provide housing that is fit for human habitation. As a result, when a tenant does not pay rent, a judge can order them out of the property, no questions asked.

This power imbalance is especially acute in Marion County, where there is a documented history of rampant habitability issues concentrated in predominantly low-income rental housing communities. Legally, landlords are required to provide housing that is habitable, under the “implied warranty of habitability.” When someone becomes a landlord, it is implied they will only rent homes that are free from dangerous environmental hazards like mold, lead, and asbestos; structurally sound; not infested with pests like bed bugs, lice, or rodents; and have major systems, like heating and cooling, electrical, and plumbing in good working order. However, some landlords do indeed rent unsuitable apartments to tenants, with little legal recourse. Local landlords are required to register their properties in order to boost accountability, but thousands of rental properties are most certainly absent from the official list, since the city has no way of ensuring landlords actually register.

Throughout my small claims court observations, it was clear that the lack of legal representation, as well as the absence of state laws that would allow tenants to withhold rent for poor unit conditions, play a significant role in creating imbalance in landlord-tenant relationships in Indiana.

On a Monday morning, as I sat in my seat prepared for my second round of evictions court observations, I noticed the Scales of Justice sitting on a desk adjacent to the judge’s bench. It struck me that, although the scales were empty, they were a little off balance. It seemed like a fitting symbol for the eviction proceedings that were about to be underway.

Postscript: Abbey Chambers, a PhD candidate in American Studies at IUPUI, conducted the research in this article for New America’s Future of Property Rights Program in conjunction with a forthcoming study about housing instability and displacement in Marion County.

Displaced in America: Housing Loss in Indianapolis (Updated, with video)

New America presents a webinar on its new report.