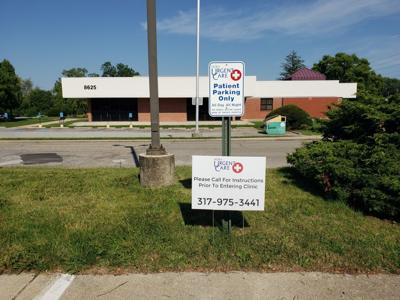 One evening, a few weeks ago, my 16-year-old daughter Naomi started complaining of muscle aches, a symptom of possible COVID-19 infection. The following morning the aches went away, but they came back again a few days later. As someone who has experienced physical symptoms due to anxiety in the past, I wondered if my daughter was experiencing the same thing. But I knew it was better to be safe. So on July 21 we got her a virtual appointment with her doctor. During that appointment, which took place via computer in our kitchen, Naomi also complained about a tightness in her chest, which was news to me.

The doctor recommended that Naomi get tested. So we looked up the nearest testing facility that tests minors, and that was Immediate Care at Nora, on the far northside of Indianapolis. Since I had to drive her, I figured I should get tested as well. Her mom felt likewise. So Naomi, her mom Katya, and I got in the car and drove to Nora.

As I drove, various scenarios were playing through my mind. I wondered if either her mom or I were asymptomatic COVID carriers. Maybe, I thought, we passed COVID to Naomi, or maybe Naomi passed it to us. Any one of these scenarios was possible. Now Naomi has been out with friends, but she had been observing social distance and wearing a mask —  mostly. It’s tough to wear a mask while eating ice cream, which she had done in the company of her friends.

Naomi’s mom is a tissue recovery specialist who harvests body parts from the newly deceased. She spends a lot of time in morgues and the back rooms of funeral homes. At least, considering her safety and ours, no one is breathing on her in those confined spaces.

As for me, I mostly keep safe, but I’ve had occasion to walk outside without a mask, or interview unmasked people outdoors while wearing a  KN-95 mask, which is not 100 percent safe. I’ve also gone to Kroger and to the bank machine more often than I should, but I’m never without my mask and hand sanitizer during these times. I haven’t been to a bar since the start of the pandemic, and the few times that I’ve been at restaurants or outdoor gatherings have been (with one exception) outdoors.

Surely by now, if one of us had contracted COVID-19, one of us would be having symptoms by now, I mean real symptoms, right? Unfortunately for my mental health, there’s no scientific principle I can point to —  notwithstanding the pseudo-scientific law of averages —  that would answer this question with a resounding yes.

We pulled into the Immediate Care parking lot. There were other cars in parking spaces, with people sitting inside, and a sign in front of our parking place telling us to call the Immediate Care facility. I called. No one picked up on the other end of the line. We opened the windows, as it was hot. (We weren’t imposing potential COVID on anybody because the nearest car had its windows up.)

There was a medical technician in a COVID spacesuit walking up to a Chevy Tahoe with a selection of swabs and he proceeded to stick a swab far up into a woman’s nostrils. The med tech left soon enough and went back into the medical office. While we sat in the car, with the windows open, it started getting hotter. It was 90 ºF and sunny. We succumbed to the heat and put on the air conditioning.

I could have turned to the radio to listen to the news but chose not to, as none of the news was particularly good. I could have also listened to my current audiobook on YouTube, Daniel Defoe’s Journal of the Plague Year, but I chose not to do that either.

July 21 was the day, you may recall, of President Trump’s first coronavirus briefing since April, and on this day he stood at the podium alone. No doctors or scientists stood with him as he mentioned a few unavoidable facts but tossed in a number of verifiable falsehoods as well. According to a report from CNN Politics, Trump used the briefing to boast that

the US has done many more tests than other countries, ignoring the fact that many peer nations did so much better controlling the virus that they haven't needed to keep conducting so many tests. He continued to say that the virus "will disappear," declining to acknowledge the inaccuracy of his previous suggestions that it would disappear without much harm to the American public —  or the possibility that it will take years for the virus to be eradicated, if it goes away at all.

On July 21, there were 1,039 deaths reported in the US from COVID-19 since the previous day according to Wikipedia. According to the same website, Indiana currently has 73,896 cases and has had 3,026 deaths.

One thing that makes coronavirus horror-novel-level scary is that 43 percent of the people carrying it around are asymptomatic, according to the latest statewide COVID-19 random sample study conducted by the IU Fairbanks School of Public Health and the Indiana State Department of Health. So there’s a fair chance that you’ll catch it from someone who doesn’t know he’s sick. The convenience store clerk ringing up your pepperoni pizza —  the one with the mask sitting on his chin leaving his nostrils and mouth exposed —  might be feeling just fine as he’s exhaling COVID on you.

Across the road from Immediate Care, I had a full view of Nora Public Library. That’s where, 40 odd years ago, I checked out a copy of The Stand, Stephen King’s horror novel that begins with a deadly plague and ends with an apocalyptic battle in Las Vegas. King is also the author of The Dead Zone, the book that chronicles the rise of the psychopath Greg Stillson to president.

I’m not necessarily comparing Stillson to Trump, mind you, but I should note that King is making this comparison with gusto. Consider the title of a recent article on King in Vanity Fair,  which, in my opinion, says it all: “Even Stephen King Thinks We’re Living in a Stephen King Book”.

I didn’t bother sharing this bit of literary history with Naomi, who was in the back seat playing Minecraft on her phone, or Katya in the front, who was sweating up a storm and getting more impatient than I was.

She tried calling on her cell but she wasn’t able to reach anyone either. Finally, she called out to the medical technician across the parking lot, and she asked him what we should do if we couldn’t make contact with the Immediate Care center. He told us to keep calling. So both Katya and I tried calling and finally I made contact with a receptionist. Finally,I was able to make contact. By the time I had dictated Naomi’s and Katya’s information, the space suit guy was ready for us.

He tested me first. I stuck my head out the car window and he stuck a swab so far up into my nostrils, it felt like it had entered my gray matter. His carside manner, however, was remarkably pleasant. “Five one thousand, four one thousand,” he counted backward, a routine he repeated with all of us. When we were all done we headed home. I had no pain in my nostrils, but I had a sour, metallic taste in the back of my mouth. Katya reported the same phenomenon. Naomi didn’t get that taste in her mouth, but, fortunately, she hadn’t lost her sense of taste, a common COVID symptom. The next morning she told us that she had been experiencing premenstrual syndrome during the time in which she had been experiencing cramps, and she hasn’t experienced any symptoms since.

The process of waiting for our test results from Quest Diagnostics, over the following three weeks, also left a sour taste in my mouth. We did everything we were supposed to do, signing up for accounts on the myquest.questdiagnostics.com website. The paper we’d been given stated that the results would take 3-5 days to be reviewed, but numerous media reports suggest that Quest Diagnostic wait times are currently much longer. There are numerous reasons why the usefulness of a COVID-19 test diminishes over time, not the least of which is the likelihood that some of those tested might be recovered, intubated, or dead before results are returned.

Six days after our trip to Nora Immediate Care, we received the results for Naomi, that she tested negative for SARS-CoV-2, the virus that causes COVID-19, but it came with this disclaimer:

Your test was negative for COVID-19, meaning that the virus was not present in the sample you provided. However, you may be infected but there’s not enough virus in your body to be detected yet. So if you’ve been exposed to COVID-19 or have other reasons to believe you are still at risk, avoid contact with anyone in your home or in public and consider retesting. You can talk with your healthcare provider about your test results. Laboratory test results should always be considered in the context of clinical observations. We suggest you continue to follow your federal, state, and local government guidance.

Since her testing Naomi hasn’t experienced anything else that approximates COVID-19 symptoms. Neither Katya and I nor Naomi’s brother Yoel —  who was with his dad during the time we were tested —  have experienced any symptoms.

On Thursday, Naomi heads back to Carmel High School, which will be operating at 50 percent capacity. (Her 8-year-old brother, however, is doing virtual schooling due to his asthma.) As I told Naomi recently, it’s likely that our testing experience will just be a warm-up for flu season, when everyone will be freaking out over the slightest cold or flu symptom and thinking it’s COVID, or vice-versa. I’m trying to get everybody in our household on board with wearing masks inside the house when we’re in common areas. But I’m not sure how practical that plan is.  When we find out, I’ll tell you.

Katya and I are still in limbo awaiting our results in the meantime, almost three weeks after being tested.

A sobering portrait: the 2020 Virtual State of Indy Arts & Culture