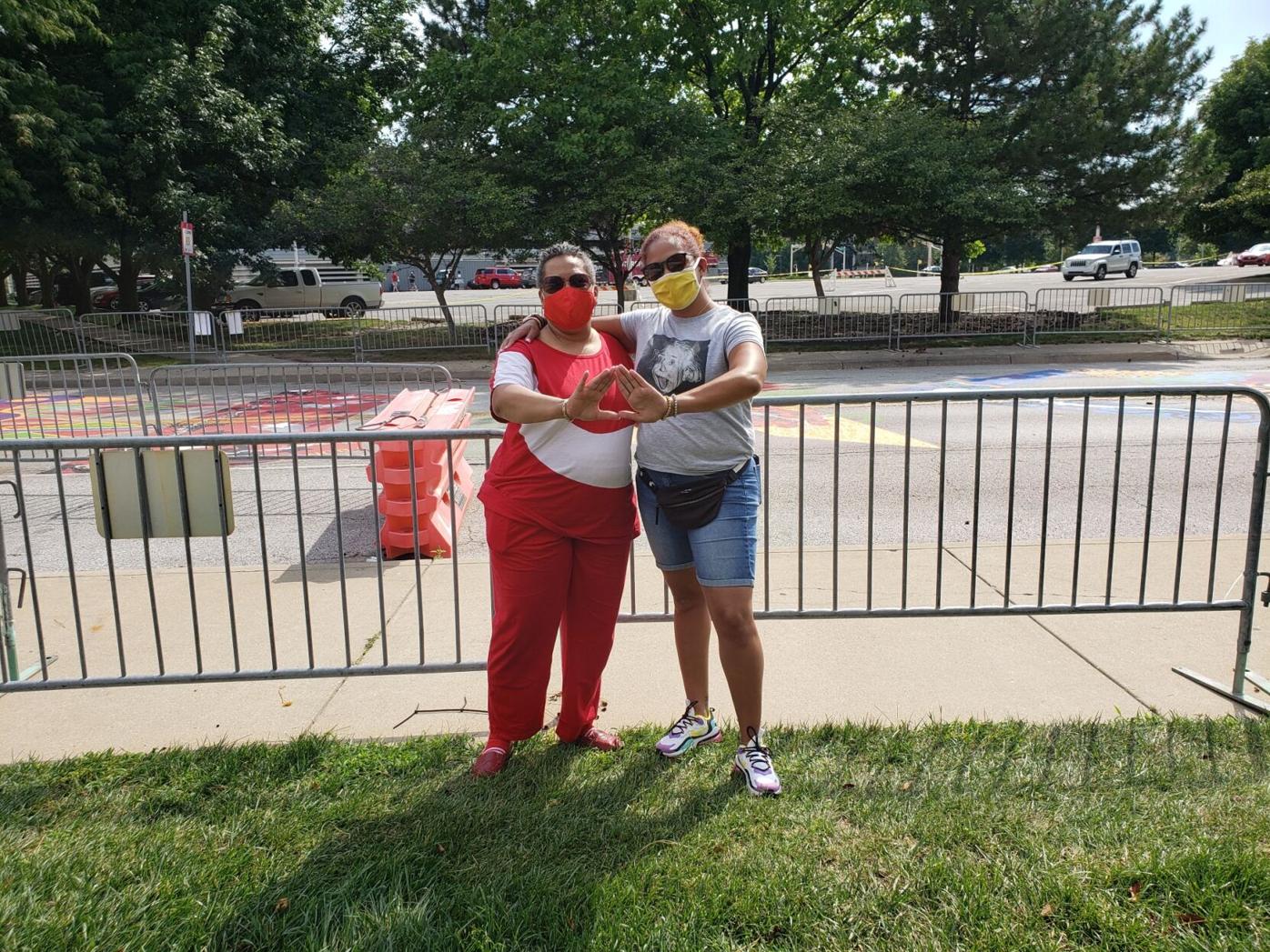 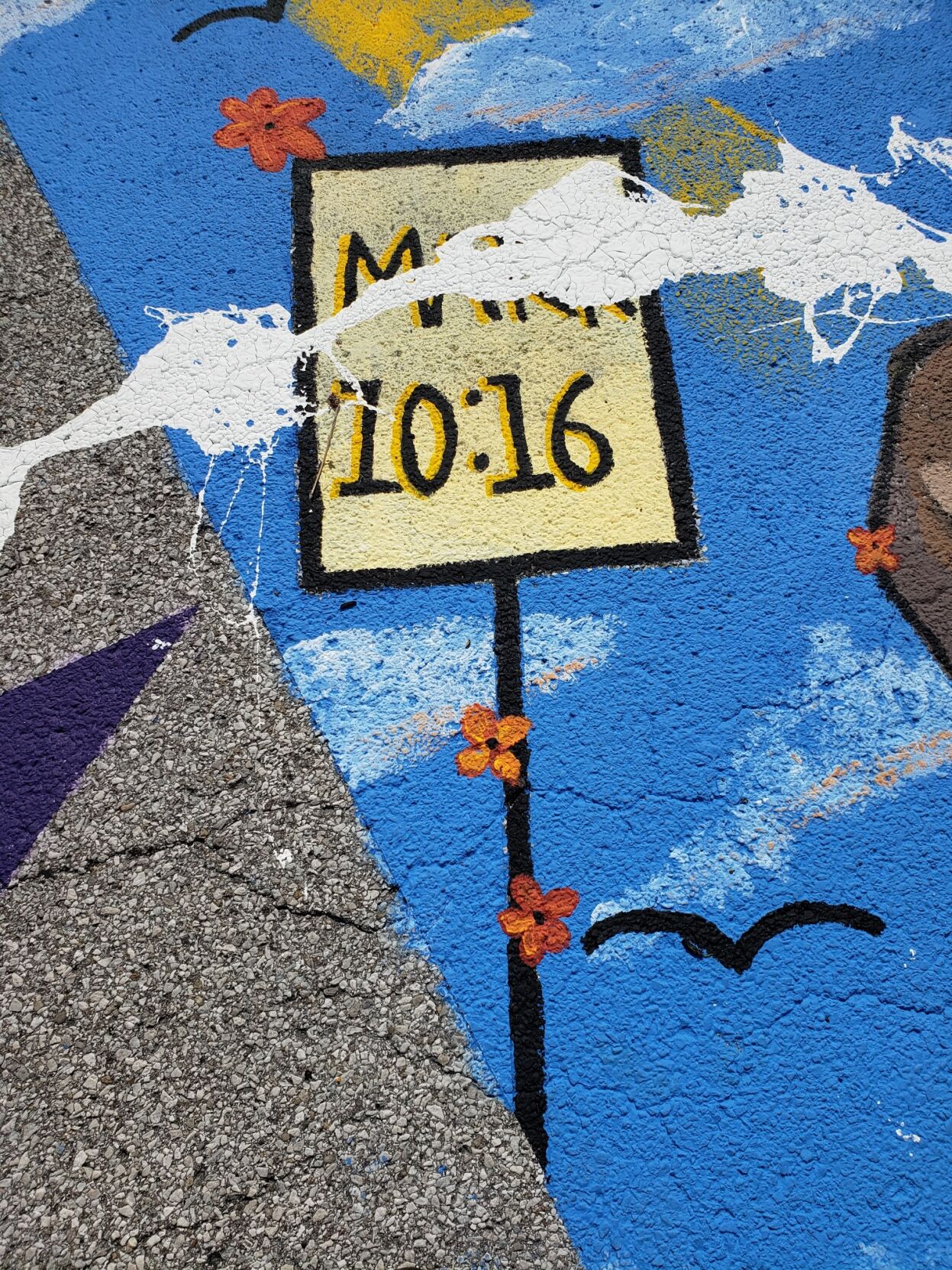 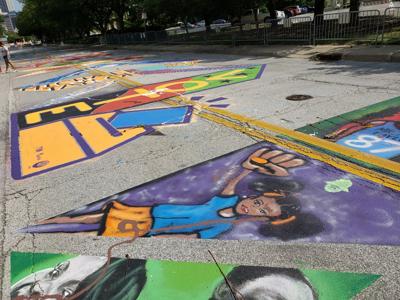 The Indianapolis City-County Council approved the street mural project, as part of a resolution sponsored by Council president Vop Osili against racism. The mural, spelling out the words “Black Lives Matter” was painted by 18 Black artists, one artist per letter.

The murals were completed within sight of the Madam C.J. Walker Building, a significant landmark in terms of African American history in Indianapolis.

What distinguishes this mural from others, such as the BLM mural painted in yellow letters on 16th St. NW in Washington DC, is that each letter is a distinct work of art. Some of the artwork consists of portraiture. There’s Gary Gee's depiction of a young girl raising a Black Power fist —  among other visions of Black empowerment, but there are also portraits of African American men and women lost to police violence. There are also colorful designs like that of the Pan-African flag.

From above, the mural spells out Black Lives Matter, but from the ground it’s hard to see the phrase spelled out. Instead you’ll notice the artwork of the talented artists involved in the project.

It’s easy to find artwork incorporating BLM subject matter if you happen to be downtown. You can find numerous murals by Black artists along Mass Ave. that are part The Murals for Racial Justice Project, sponsored by The Arts Council of Indianapolis. At the Harrison Center’s City Gallery you will find, during the month of August, The Unheard, Indy’s Response to Racial Injustice by Courtland Blade, whose paintings depict scenes from recent Black Lives Matter protests in Indianapolis.

One of Blade's paintings, “A Prayer for Indy”, depicted the Faith in Indiana - sponsored “Processional for Racial Justice” that took place downtown on May 31, a week after the death of George Floyd by Minneapolis police officers.

I was at the Indiana Statehouse that day as the processional was going on, covering this march for NUVO. I had parked my car beforehand on Mass Ave. While walking down the street towards the Statehouse where the Processional was scheduled to start, I smelled cut plywood and heard the screech of electric saws. Workers were boarding up the windows that had been shattered during the previous night’s rioting. This had occurred during and/or after the George Floyd police brutality protests, which had taken place in the same area.

Unfortunately, the Black Lives Matter mural was defaced by swirls of white and grey paint. Fortunately, the vandal didn't have the patience, the ability, and/or the wherewithal to cancel out the vision and intent of the skilled and passionate artists employed in this enterprise.

The defacement happened some time on Sunday, August 10 before dawn.  Few of the large letters on the street were left untouched.

One defaced section was the depiction of a sign reading simply "Mark 10:16" which, referring to Jesus, reads "He took them in his arms, placed his hands on them, and blessed them." Maybe this refers to those killed by gun violence.  But this particular mural also depicted a sign reading "Black Futures Matter", "Black Dreams Matter" and the portrait of a little girl named Jumee, age 5. whose quote "When I grow up I want to be a dentist" is written into the mural.

At around the same time I was checking out the murals House Majority whip, Jim Clyburn was being interviewed on MSNBC. The South Carolina congressman was particularly incensed about the Trump administration’s actions, which one might describe as vandalism, towards the Post Office.

“I never thought I would ever see a political party allow the head of its party to do to the constitution of the United States what this guy is doing,” Clyburn told NBC’s, Brian Williams. “And we better wake up to it real soon and forget about political parties. Let’s talk about preserving this democracy.  It’s the best thing going on but like every other big government going back to Rome, this too can fall.”

I’m not the only one, I suppose, who thinks our president is something of a vandal.

I wasn’t the only one, it turns out, who had come to see the murals. Delta Sigma Theta sorority sisters Barbara Morgan, a 1976 graduate of Ball State, and Andrea Brown, a 2005 graduate of Indiana State University had also come to check things out.

“I knew they were doing it and I saw the aerial view but I wanted to come to see it for myself,” Morgan said. “You don't realize all the significance of all the things that are on there. I do know some of them. Plus, they did a TV show. One of the TV shows did a, a cameo of one of the artists.”

“With the history of Indiana I think it's very progressive that Indianapolis had passed this resolution to get this artwork on our street [...]” Brown said.

Morgan was impressed by the creativity of the artists, and by the difference between the Circle City mural and the one in Washington D.C. “This one has things in it that represent the city and the history of Indiana Avenue and Indianapolis,” she added.

Correction: The article originally quoted Matthew 10:16 when it was actually Mark 10:16 and that portion of the article was rewritten to reflect this correction.