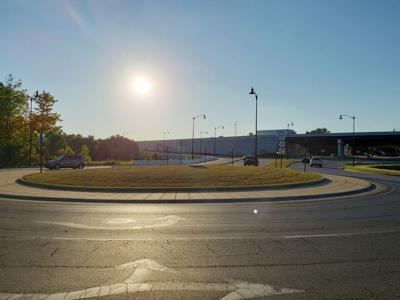 I can't say that I'm much of a runner, but I jog on a regular basis. The activity sometimes relaxes me and sometimes puts my thoughts on spin cycle.

Last night I jogged up First Ave. N.W. and then jogged back south on Rangeline Road in Carmel, avoiding the Monon Trail. This has largely been my M.O., since the COVID-19 pandemic started. Along the route, I skirted Carmel downtown, where many were dining outside.

The servers were wearing masks but, of course, none of the diners were.

Also wearing masks were the life-sized man-on-the-street sculptures of J. Seward Johnson, abiding by the city of Carmel’s “Wearing is Caring” campaign. I’ve never been a big fan of these sculptures, but I suppose they are partly responsible for giving Carmel's Art and Design District its distinctive ambiance, which I’ve written about elsewhere.

However, what I think what Carmel will be remembered for, when cockroach-biped archaeologists dig up our cities 500,000 years from now, are not the Johnson sculptures but the roundabouts. Carmel has 125 of them, more than any other city in the U.S., thanks to Mayor Jim Brainard who imported the roundabout concept from Europe.

A substantial amount of research suggests that roundabouts have safety benefits but not everyone is in love with them. I recall, back when I was Uber driving, the reaction of one passenger to the roundabouts. She had grown up in Carmel, but hadn’t been back to the city in 15 years. We were at the intersection of U.S. 31 and Old Meridian near St. Vincent's Carmel Hospital, where there are six or so roundabouts all bunched together, headed towards W. 136th St.

“Daniel,” she said to me. “You have to explain to me what the fuck is going on!” But I wasn’t able to answer her question/exhortation to her satisfaction.

I suppose something about that experience informs the following prose poem which features my daughter Naomi (also not a fan of the roundabouts).

My daughter and I are zooming around first of six roundabouts in mindfucking proximity to each other at the intersection of Old Meridian and 136th Streets. I'm telling her about the first black hole ever photographed. The black hole 55 million light years away. In the center of that black hole, wider than our solar system, is a singularity: infinitely dense and infinitely small. But the singularity at the center of this particular roundabout is the pull of regret. And it pulls me in, through a wormhole into an alternate universe where instead of working in a bookstore for a decade after my Peace Corps service I win a fellowship to study Arabic at Cairo University. Immediately after graduation, I get a job at the Egypt bureau at The New York Times and they have me report from all over the Middle East for a decade. During the Iraq War, I have two close calls with IEDs. The second one lands me in the hospital with a concussion. I fall in love with the nurse, Sasha Selim. Sasha’s into Kabbalah, kink, and early Madonna. We get married and buy a flat in London. Against the advice of our Kabbalah Centre rabbi, I accept a reporting assignment in Syria just after we discover that Sasha is pregnant with twins. Right away, stationed in Damascus, I land two interviews with high up commanders in the Syrian opposition, interviews arranged by my bodyguard. The resulting features make the front page. But the third interview he arranges isn’t with the rebels. It’s with ISIS. They put me in an orange jumpsuit and in front of a green screen. My rabbi’s advice is ringing in my ears as my head, spurting arterial blood, is severed from my body. That falls away from under me. Just as the lights fade, I make the third turn-off onto Old Meridian and we fly by St. Vincent's Hospital at a wicked clip. It occurs to me, as my daughter shoots me a startled glance, that I have a pretty good life.

I gave up Ubering because of COVID-19 but its still part of me.