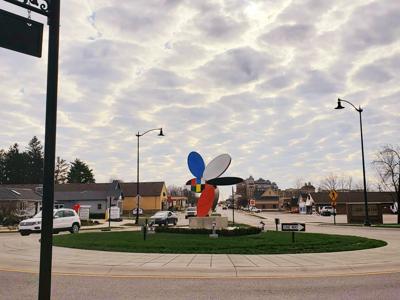 He’s not dressed in a robe as he sits down in the middle of the grassy roundabout. He’s got Eddie Vedder duds — flannel and khakis — but it’s almost winter time, and this is Indiana, not Seattle. It’s like the scene in The Last Temptation of Christ where Jesus, played by Willem DaFoe, sits down in the desert and draws a circle around himself. But, of course, the circle is already here so he doesn’t have to draw anything. As he’s sitting, fasting, and reciting prayers, the good citizens of Carmel are circling around him in their cars, mumbling, shooting him shocked glances, pulling out smartphones. Within minutes there’s a fender-bender; a Ford Prius ass-up against a Toyota Camry. The police are there not long after. A female officer approaches Jesus, squats down, and says, “Sir, are you all right?” and he responds, “Blessed are the meek. They shall inherit the earth.” She looks up at her commanding officer, who shouts, “Sir, I think you should move along.” But there is no statute that any police can find to compel him to since he presents neither a public nuisance nor public health threat so eventually, the police leave. Eventually, the news crews that came out during the first few days get bored and leave as well. Drivers start thinking that he’s another sculpture, just like the other realistic J. Seward Johnson sculptures in bronze that populate Carmel downtown. A month goes by, rain and snow falling, and the skin around his jaws start sagging like sunburnt Saran Wrap. After 40 days and 40 nights, he finally stands up —  with frost crusting his khakis —  and walks back to wherever he came from. The road to heaven doesn't always follow the straight and narrow path.

Overnight Applebee’s Neighborhood Grill and Bar invaded Indianapolis. They parachuted in the workers, the bulldozers, the prefab construction materials, and management. In the morning there were brand spanking new Applebee’s all over the Circle City. From Mars Hill to Haughville, from Speedway to Meridian-Kessler. I was driving past Speedway Applebee’s listening to Morning Edition on NPR, and Amelia Taglia was explaining the chain’s invasion in sexual terms. She called it “the last ejaculation of American capitalism.” She continued, “In the age of microbreweries and locally-sourced everything, Applebee’s won’t survive without drastic measures because millennials hate Applebee’s.” When asked what those measures are, she said, “It might require something like the Chinese are doing to the Uighurs; rounding up millennials and herding them into the restaurants at gunpoint.” But for me, I required no such incentive. Even though it was morning and they weren’t yet open, my mouth was watering for their Bourbon Street Steak as I cruised for Uber rides. The saliva quickly filled up my car; it sloshed back and forth in frothy waves on the bridge before the Applebee’s turnoff. Unable to see the road because of the saliva spattered on my glasses, I hit a pothole and skidded to a stop. I was wiping the lenses off when I saw them —  the armed militiamen on motorcycles. The open-bed trucks followed closely behind, with loads of millennials in back, shackled and naked.

Everybody I Uber drive today is talking about the rain. It’s been raining 40 days and 40 nights and the farmers aren’t getting anything in the fields. Just about all the fields I pass on the outskirts of town are flooded. Charles from Fishers says he thinks it’s going to rain all weekend. “Just like last weekend,” he says. Helen from Noblesville says the forecast is for much more. “Shit, this is the wettest weather I’ve ever seen,” says Bill, the auto dealer from Brownsburg. When I pick up Thelma from the airport, she directs me to the service road, but this shortcut is flooded. So we have to turn around. I drop her off in Speedway and head back to the airport. On the way, I pick up Pam in Plainfield, who smells like cigarettes and demands that I go 90 miles per hour, so we make her flight to Baltimore. All the fields we speed by are waterlogged, and the corn is stunted, while the clouds above us pile up high in the stratosphere, black and foreboding. I drop her off and drive to the rideshare waiting lot. As the sky opens up and dumps down, I go to Chess.com on my phone and play on level 10 and lose continuously. In playing chess at the highest level, I see what man is up against when going against entropy. I get some idea, anyway. Just as I lose my queen to the white bishop, I get pinged by a guy named Noah. As I pull into the UBER/LYFT pickup zone, he’s there with his cane, his wife Naama, and two baby kangaroos. New Palestine is Noah’s destination. He’s carving a boat from Hoosier National Forest hardwoods, he says. But I cancel his ride because he doesn’t have car seats for the joeys.

Grossman: The last time I saw Elvis and Tom Petty in Indy, which was never

When digging the foundations for the new cities