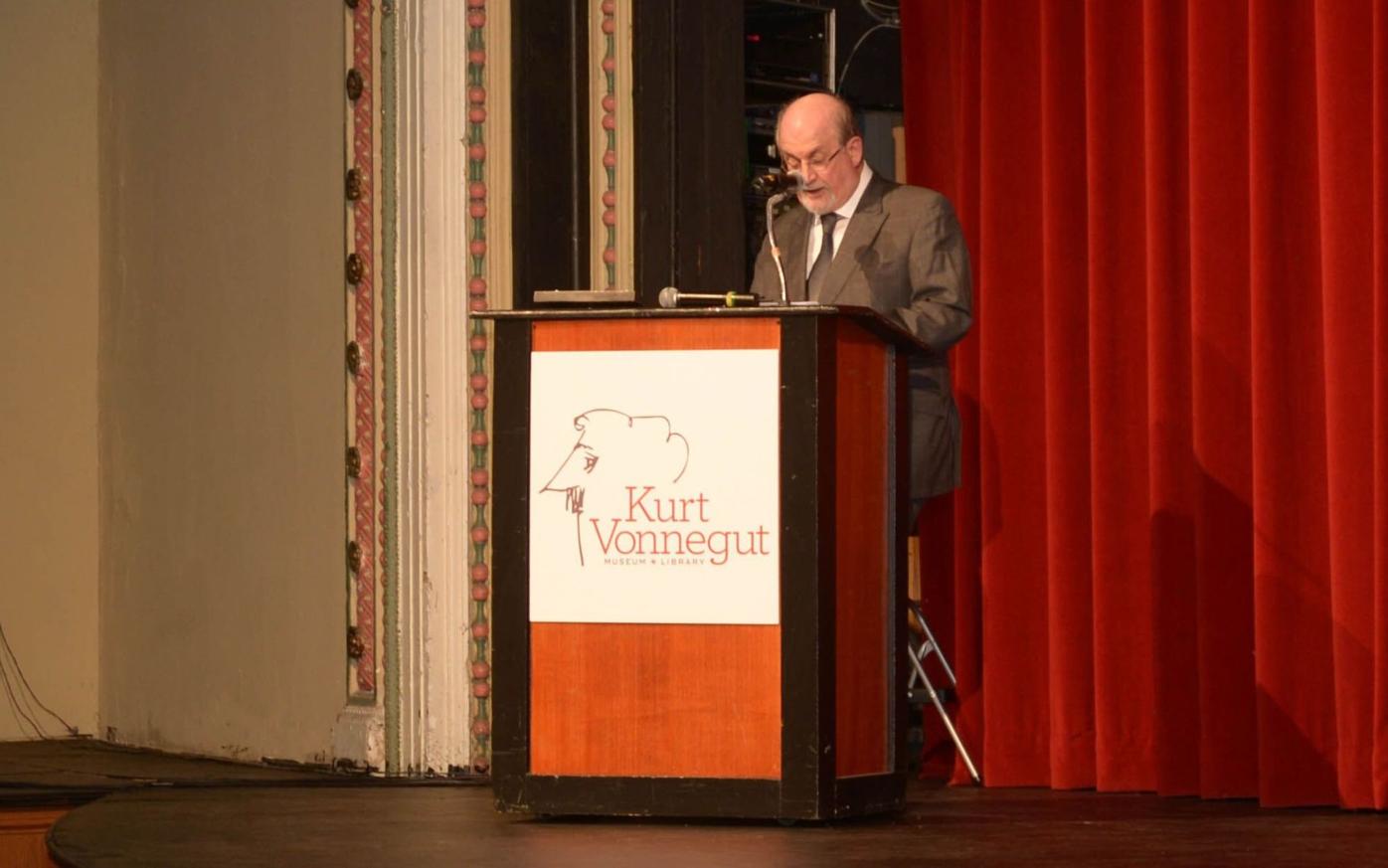 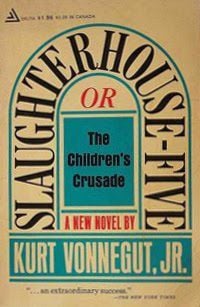 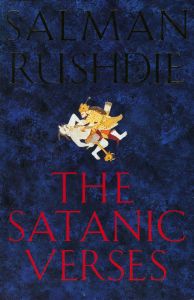 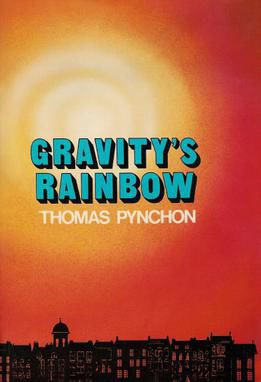 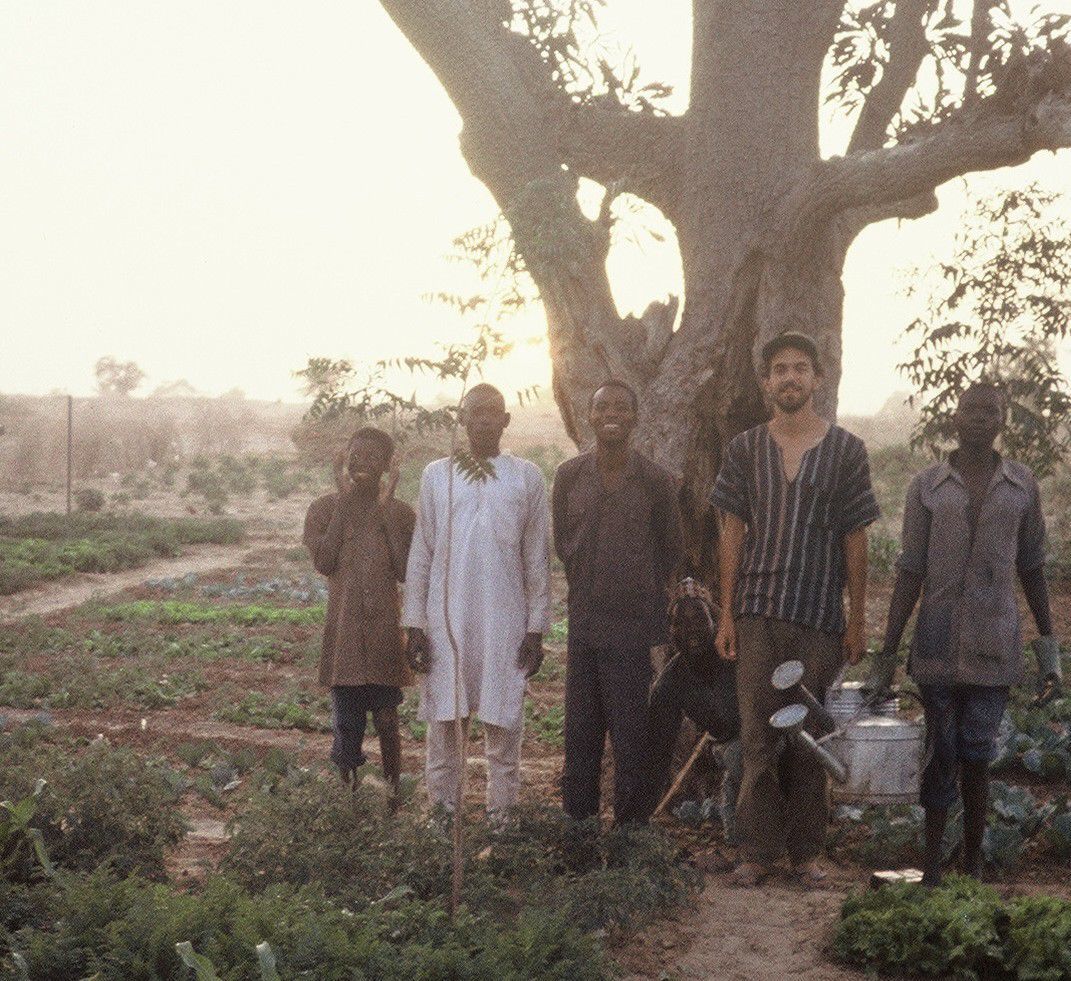 Dan Grossman with friends in Mai Guero, Niger in 1992

As I watched Salman Rushdie deliver the keynote at the annual fundraiser for the Kurt Vonnegut Memorial Library on Thursday, April 11, I became unstuck in time, as it were, and recalled an incident from my Peace Corps service in the early '90s.

I recalled drinking tea with my landlord, Halilou, and several of his friends on a plastic mat, out under the Milky Way, listening to the shortwave.

Halilou had his shortwave band turned to a BBC Hausa Service news broadcast. My Hausa language skills weren’t quite good enough to follow, but my ears perked up when I heard Salman Rushdie’s name mentioned.

This was in the predominantly Muslim village of Mai Guero, 20 miles south of Maradi, Niger, in West Africa.

The news on BBC likely had to do with the hostile relations between Iran and the U.K., where the Bombay-born Rushdie was living at the time. As you might recall, the Ayatollah Khomeini of Iran had issued a fatwa calling for the death of Rushdie in 1989 for writing The Satanic Verses — a text “written, edited and published against Islam” according to the fatwa.

I don’t recall what my landlord said exactly at that moment, but it was something to the effect that Rushdie was a bad man. Halilou — just like millions of other devout Muslims around the world — considered Rushdie to be a blasphemer.

Rushdie, who had to go into hiding for nine years, achieved the kind of fame with The Satanic Verses that no novelist wants.

Having read (and enjoyed) the novel myself, I can also see why it drew the ire of the Ayatollahs. Both the protagonists are of Indian Muslim descent: in the course of the narrative, one takes on the personality of Archangel Gabriel while the other takes the form of the Devil: the novel also contains a re-narration of the life of Muhammad. The setting is contemporary England. While the plot’s too complex to describe in a nutshell, it has something to do with the God-shaped hole that you’re left with if you abandon your birth religion for a secular life.

Iran would eventually withdraw its support for the fatwa in 1998, in a bid to improve relations with the U.K. but the fatwa itself has never been withdrawn.

Rushdie didn’t mention the fatwa at all in his keynote at the Athenaeum. Instead, he addressed what is probably Kurt Vonnegut’s most famous novel, Slaughterhouse-Five, which turned 50 this year.

The protagonist of this anti-war novel is one Billy Pilgrim. Like Vonnegut himself, the fictional character served in the European theater during World War II and was taken prisoner by the Nazis. And like Vonnegut, Pilgrim survived the firebombing of Dresden — in which 130,000 civilians died — by taking refuge in a cellar deep underground.

But Slaughterhouse-Five is, to say the least, an unconventional war novel.

During his life post-WWII, the protagonist is captured by aliens from the planet Tralfamadore. When eventually he returns to earth he starts to experience time as Tradlfamadorians do, which is to say they see past, present, and future simultaneously. That is to say, he becomes unstuck in time, reliving different episodes in his life in random sequences.

The most distinctive and memorable aspect of the novel is probably the phrase, “So it goes,” which appears repeatedly throughout the text. When I read the book, as an eighth-grader, I found this repetition annoying.

In subsequent years, I’ve looked back towards that novel and sensed a certain fatalism about it. I’m not the only one, it turns out, to have read the novel that way. Rushdie takes on this interpretation directly in his keynote.

“There are those who have accused it of the sin of quietism, of a resigned acceptance even according to [British writer] Anthony Burgess, an evasion of the worst things in the world,” he said.

But for Rushdie, who has lived in the U.S. since 2000, this is a profound misreading of the text.

“'So it goes' is not a way of facing life but of facing death,” he said, further on in his keynote. “It occurs every time in the text when someone dies and only when someone dies.  It is also deeply ironic. Beneath the apparent resignation is a sadness for which there are no words.”

In conversation after his keynote, Rushdie noted how fresh Slaughterhouse-Five felt to him while re-reading it. In comparison to Vonnegut, he said, the novels of his (Rushdie's) contemporary Thomas Pynchon felt dated.

As for me, when I look back at it, I realize that Vonnegut was a bridge for me between hard-edge science fiction writers like Larry Niven and more literary types of fiction. One of the novels I came to was Thomas Pynchon’s Gravity’s Rainbow, which — while brilliantly funny and compellingly absurd — is also deeply paranoid.

The current occupant of the White House seems to embody, in some ways, the malevolent forces in that novel.

That is, when our president expresses his love for fellow psychopath Kim Jong Un or encourages violence against Rep. Ilhan Omar, D-Minnesota with his tweets, he seems vaguely like a Pynchonesque villain. In other ways he seems sort of like a black hole, impossible for any novelist to shed light on.

We are all Americans. This is endangering lives. It has to stop. pic.twitter.com/gwB2kDUIRp

In a recent article in The Atlantic, by Richard North Patterson, “I Used To Write Novels; then Trump Rendered Fiction Redundant”, the title telegraphs the punch.

He writes in that piece:

"The aim of the novelist is to enlist others in his fantasies, immersing them in an alternative reality so emotionally compelling that they willingly suspend disbelief. Trump has dangerously conflated this sort of storytelling with real-life presidential leadership, casting himself in the role of the archetypal savior-hero, battling the forces of evil. He’s our first novelist in chief."

At times, as someone who despises Trump, it seems easier for me just to give up on politics all together. This is because Trump has so much control over the narrative. (This may explain his appeal to those who, in Bob Dylan’s words “want to be on the side that’s winning.”)

And in writing about Trump, I feel now like I recently did when my landlord and friend Halilou called me from Niger, and I tried to respond in Hausa after 25 years of not speaking that language.

But maybe a little optimism — Vonnegutian optimism, of all things — is in order here. After all, if you want to fight the powers that be, first you have to get out of bed in the morning.

For Rushdie the “characteristic note” of Slaughterhouse-Five is cheerfulness in spite of everything.

“It may be a cheerfulness beneath which much pain is hidden but it is cheerfulness nonetheless,” he said. “It doesn’t tell us that wars are hell. It tells us that most human beings are not so bad, except for the ones who are.”

If you're interested in finding out more about the Kurt Vonnegut Memorial Library, or if you want to help them raise $1 million by May 15, so they can movie into their "Forever Home" at 543 Indiana Avenue, click here.

🎥 An Interview with Tatjana Rebelle

It's summer and time to read some good books. What have you been reading lately?

The former NUVO arts editor and columnist talks about his experience with the Creative Renewal Arts Fellowship, his continuing love for Indianapolis, and the property disputes along the beachfront in Michiana, where he has lived for the past six years.