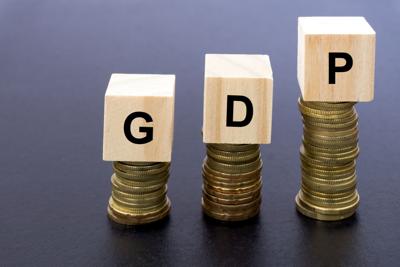 For many readers data do not matter. Any number can be satisfactory or disturbing according to their beliefs. It’s like the protests on the streets. Some hear anguished cries for justice while others see mobs tearing the social fabric.

Nonetheless, let’s look at the data. Real GDP measures the value of goods and services produced by business and government in the market economy, independent of inflation.

When divided by population, Real GDP becomes Real GDP per capita where that output is produced. It can be interpreted as the capacity to produce for the people what they expect from the economy, what the people demand of the economy.

Since some portion of Real GDP is exported to other communities, it also reflects what the world chooses to buy from a given place. Exports, however, rise or fall as local businesses decide to seek customers beyond local, state or national borders. Therefore, exports too reflect the local population’s world view.

Do those figures trouble you or provide you with comfort? For some they demonstrate Indiana lags the nation, failing to provide Hoosiers with outputs comparable to other places.

For others those are data affirming a commitment to progress without the dash and disruption more rapid growth provides.

On the supply side of the economy, the data provide similar opportunity for conflicting views. Between 2008 and 2018, jobs in Indiana increased by 7.7% compared to a 12.0% national gain. That put us in the middle of the states in 25th position. Our Real GDP per job rose by 2.5% compared to a 6.6% advance nationally, 35th among the states.

Do these figures represent some inadequacy of our labor force? Are we less competent, less skilled, more slothful/relaxed than typical Americans?

Or should we complain businesses are not investing in our state? Don’t they know about the advantages of our location, facilities, and quality workforce?

Are other states luring away our most successful young enterprises, out-bidding us for expansions? Or is our competition being wasteful, doomed to not reap the benefits they imagine.

Finally, are these matters of government or of the private sector? Should we subsidize business for the sake of jobs? To what extent should politicians step in when the business community seems sluggish? Alternatively, does business and labor need to energize sluggish government to remove impediments to growth? Yet, are those truly impediments to Indiana’s growth or just responsible, reasonable speed bumps?

These are questions for us all and, particularly, the candidates running for Governor.