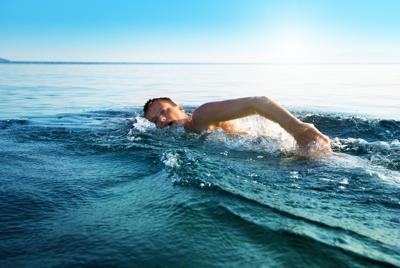 I love swimming in Lake Michigan. The lake, of course, has to be amenable. There are days when she is emphatically against it, with waves tightly packed and roaring up overhead. People are lost on days like these. There were thirty-five drownings reported in Lake Michigan as of early September. It’s likely there have been a few more since then.

Then there are those days when the lake, in effect, says, “It’s up to you.” She’s choppy and in your face. No matter how you try to time it, there’s water whacking up your nose and down your throat.

The best days, of course, are when the lake is supine. Water laps the shore like a puppy’s tongue and serves as a medium in which one’s body is for a time suspended between earth and sky. On days like these, I can roll over on my back like an ungainly marine mammal and float, watching clouds and, I swear, feeling very slightly, the planet turning.

This year’s swimming season started, for me, on Father’s Day, June 20. Up until then, the water temperature was too intimidating. Cold enough, that is, to turn your heart into a stalagmite and make your brain crack like a windshield in a hail storm.

I have ventured in earlier than that. Once my friend Frank Vardeman and I held hands Butch and Sundance style and bum-rushed the lake in April when the water temp was probably in the low 50s. It was one of those things I haven’t felt the need to do more than once — like spending St. Patrick’s Day in an Irish bar.

My neighbor Vince, on the other hand, is usually the first swimmer in the lake every year and the last one to give it up in the Fall. Vince has been swimming in Lake Michigan since he was a kid. He works in a steel mill, which allows him a flexible schedule and so it’s not unusual to find him at the beach with his towel and a folding chair. Now that the summer season’s done, we’ve often been the only ones there. We use a kind of shorthand to communicate the pleasure this situation brings us with one another: Vince looks at me, I look at him and both of us grin as if we’d won the lottery.

I learned to swim at a YMCA in the Chicago suburbs when I was in elementary school. This was in the winter and it was dark by the time our lessons were over. I remember the smell of chlorine in the locker room and how strange it was seeing streetlights and snow outside the foggy plate glass windows along the side of the pool. I don’t think the lessons lasted more than a few weeks but they were life-changing. I’ve been swimming ever since.

I wonder how many kids take swimming lessons now. Though I see plenty of people standing or splashing in the water, clambering on and off all manner of inflatable toys, kayaking, paddleboarding, and so on and on, it’s becoming unusual to see someone simply swimming. It’s not as though we are a landlocked people, here, in this Great Lakes part of the Midwest. Swimming, you’d think, is part of our heritage. Should be part of who we are.

Try it some time. You can feel the Earth move.

David Hoppe’s memoir, Midcentury Boy, is available through Amazon and other online booksellers.