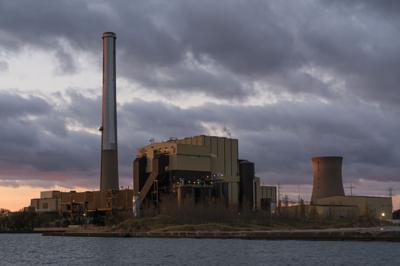 The news in 2018 was good: NIPSCO, the company responsible for supplying people in northern Indiana with the power necessary for heating our homes and keeping our lights on, announced it was kicking its coal habit.

When it comes to energy dependence, coal has been the drug of choice in Indiana for generations. In the 1930s, a coal-fired plant was built alongside an otherwise picturesque harbor in Michigan City. The site had formerly boasted a 200-foot sand dune, a popular fin de siecle tourist attraction called Hoosier Slide. After the Slide was carted away to make blue Ball Jars, the city fathers in Michigan City sold the site to the Northern Indiana Public Service Company for a dollar. They’ve been burning coal there ever since.

As with so many drugs, the reward-risk ratio with coal has been powerful and steep. We’ve used coal for such a long time and in so many ways that it can be hard for some to imagine life without it. So NIPSCO’s decision to wean itself off this prehistoric junk in favor of renewable forms of energy, like solar and wind, by 2028 was seismic.

It also meant Michigan City could finally get its lakefront back. As part of its coal phase-out, NIPSCO announced it would demolish the Michigan City generating station. For the first time in almost a century, residents and visitors going to the lake in Michigan City will be able to experience the lake without a colossal industrial pile looming over them.

Which is where things get complicated. It’s one thing to kick a habit, another to get truly clean. When you burn coal, you make ash, tons and tons of it. Coal ash is poison — several poisons, in fact, including arsenic, chromium, lead, and mercury. NIPSCO has been storing this stuff in five ponds on its grounds since the 1970s. But before that, it used coal ash for landfill to extend its site into the lake. This ash is euphemistically called “legacy.”

NIPSCO has said it will carry the ash stored in its ponds away for burial at a site in Wheatfield (sorry, Wheatfield). But the utility claims that ash used for landfills poses“no risk to human health or the environment, no impacts to drinking water supplied to neighboring communities and nothing to indicate that the state’s waterways are being compromised.”

This legacy, in other words, is like a sleeping dog — best to let it stay that way. Except that the only thing standing between NIPSCO’s ashy landfill and Lake Michigan is a rusty steel wall. What’s more, groundwater near the NIPSCO plant reportedly contains 50 times more arsenic than is considered safe for human health. Once the bulldozers arrive and the process of plant demolition begins in earnest it is hard to think that dog will keep from barking.

Just Transition Northwest Indiana is circulating a petition (tinyurl.com/protectlakemichigan) asking people to sign their names in order to compel NIPSCO to clean up not just its coal ash ponds but its entire site. They call this a “clean closure.” A thorough clean-up, according to Just Transition, will result in a measurably greater economic benefit to the local community, create jobs, and generate new revenue. It will also protect residents from the residual effects of coal ash in their community as well as prevent a catastrophic spill from fouling Lake Michigan’s precious freshwater.

NIPSCO, of course, would rather avoid the trouble and expense of a clean closure. It may truly believe that dealing with those ponds is sufficient. But half measures won’t kick a lifetime habit. Getting clean is hard.

David Hoppe is the author of the memoir Midcentury Boy. Order it on Amazon.