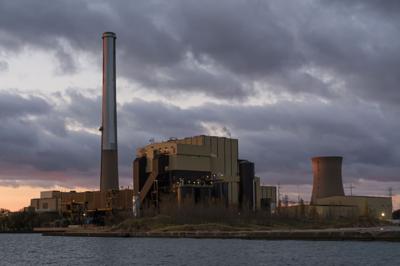 When was the last time you heard of a wainwright? I am not referring here to the marvelous singer and storyteller Loudon Wainwright III, son of a writer and editor for the once-mighty — now-departed — illustrated weekly, Life Magazine. No, the wainwright I mean is someone who built and repaired wagons, also known as wains — those conveyances pulled by horses and used to carry everything, from milk to coal and, of course, people.

Wainwrights — and the horse-drawn transportation that kept them in business — came to mind the other day as I was reading a news story about the potential impacts of the decision by Indiana utility companies to phase out their coal-burning power plants.  Researchers from Indiana University’s Public Policy Institute have been studying some of the ways closing these plants might affect communities like Michigan City, where coal has been the fuel du jour for decades.

The report outlined the role NIPSCO’s Michigan City Generating Station has played in the local economy.  The jobs and pay rates it provides, the taxes it has paid, its contribution to the region’s GDP. It also speculated about what might happen to workers and revenue streams once the coal-burning is ended. “Current workers may have to relocate to find similar compensation,” according to the report. Wages and benefits, it said, “generally may be difficult for displaced workers to replace.” It went on to state, “there is an increased likelihood of property cap losses.” And local governments could see, “potential property tax increases…”

Although the report noted how getting free of coal will likely improve peoples’ health thanks to cleaner air and that clean energy substitutes are bound to create new jobs, it estimates that closing these polluting plants will result in the loss of $354 million in economic output.

Which is what made me think of wagons. Until the 20th century, if you wanted to carry freight or merchandise or, for that matter, your family across town or across the country, you hitched a team of horses to a carriage or a wagon, took hold of the reins, and said, “giddyup!”  Skilled workers (those wainwrights) constructed wagons, crafted wheels, made harnesses, and designed axle assemblies. There was also a large market for horses able to pull whatever needed to get from here to there. Those horses ate feed raised by farmers; carpenters built them stables and carriage houses.

In his novel, The Magnificent Ambersons, Booth Tarkington wrote about an Indianapolis family whose fortune, based in part on the wagon trade, is eclipsed by the arrival of the motor car and the industrialization created by this new form of transportation. Adapting to these changes proves hard for the Amberson family. But those changes make possible a more general growth and prosperity in the city where they live than any of them previously imagined.

The Magnificent Ambersons is a quintessentially American story about how progress transforms people and communities. It rhymes with what’s coming as we finally prepare to kick our wheezing dependence on coal.  But as necessary and even inevitable as this change is, it also creates a moment in which the temptation to fixate on losing what’s familiar can be daunting. Here’s where history comes in. There was a time when a world without wagons was probably unthinkable — unless, of course, your name was Henry Ford.

Letter from Michiana: Carl Sandberg and the Indiana Dunes