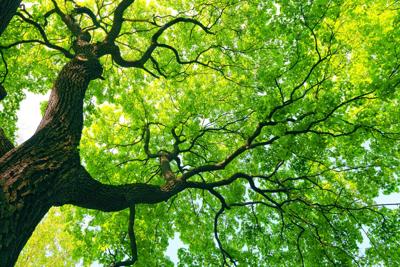 A storm blew down the lake last night. It arrived a little after three a.m., with heavy thunder and a pelting burst of rain. Earlier, Tom Skilling, the Mister Rogers of meteorologists, had suggested this fast-moving weather outbreak might feature hurricane-like winds. I didn’t like hearing that. There’s a dead limb on an oak tree overhanging our house. I saw it just a few days ago and called an arborist to come and take it down — who knows when that will happen.

By my sleepy calculation, the storm was here and gone in a matter of minutes. That oak limb, precarious as it looks, is still attached to its otherwise healthy tree trunk. So far, so good.

It’s a funny thing about trees — it seems many people are afraid of them. Shakespeare tapped into this in Macbeth when Malcolm’s soldiers camouflage themselves with tree limbs taken from Birnam Wood in order to ambush the usurping Macbeth and so fulfill the unlikely prophecy that Macbeth will only lose his crown when “Great Birnam Wood to high Dunsinane Hill shall come against him.”

This is not to say there aren’t actual reasons to be wary around big trees. Earlier this year a seemingly healthy limb suddenly tore away from its trunk and came down with an earth-shuddering thump, snapping a section of split rail fence like it was a toy made from toothpicks. It was a still afternoon, not a trace of breeze. There was no warning to speak of. We heard an emphatic report, like a gunshot, and gravity did the rest. That no one happened to be passing by at that moment was the very definition of a lucky break.

An occasional falling limb is part of the bargain you make with nature if you choose to live in a woods. For many of us, the character of this place is defined as much by the presence of heritage oak and maple trees as by Lake Michigan. The lake, the dunes, and the trees are all intertwined. They claimed this place long before any of us were even born.

People, though, are part of this equation too. But unlike the trees and dunes and lake, we plan and fret and try to manage. It’s who we are. Sometimes it seems like if we’re not cutting something down or bulldozing it flat, we must not be living up to our potential, making the most of where we are and what we have. When it comes to trees, this often means getting out the chainsaw. That’s because a tree is in the way, blocking the view, dropping leaves or seeds on somebody’s deck or, yes, maybe falling down someday.

We cut a tree down once, a double oak. We could see the long tendril of a dead limb hanging over a skylight in our bathroom. We called a tree guy. He told us the entire tree was surely dying and recommended we cut not just the offending branch, but the whole thing. Being new to this sort of situation, we believed him. Not only did we lose that double oak, but part of it also took off a section of our neighbor’s roof when the crew doing the work let a great hunk get away from them. It wasn’t until later that a certified arborist, inspecting the stump, told us the tree had probably been okay.

So now I’m looking up at another dead limb. I’m the managing animal in this picture, trying to act before I’m acted upon. Unlike Macbeth, I’m fine having the woods outside my door. The trees don’t block my view; they make it.