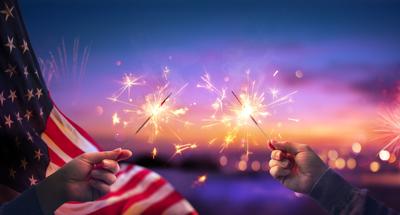 Is that the sound a pandemic makes when it’s finally over? I don’t know but an awful lot of people acted like if they made enough noise over the latest Fourth of July weekend they could will old COVID-19 away, once and for all.

Here on Lake Michigan’s southern tip, the Fourth of July is the ultimate holiday, bigger even than Christmas. The cars of visitors aren’t so much parked as crammed into every available space, sometimes three and four deep. All that’s lacking is a guy in an Uncle Sam suit, ready to deal with no money down. Our beach road, Lakeshore Drive, turns into a kind of participatory performance art piece, in which drivers of cars and various trucks, bikers, skateboarders, motorcyclists, dog walkers, and those of us bipeds traveling merely on foot, try to keep from maiming one another.

During the course of one such jaunt, we happened on a group of folks and their dogs chatting about the different mood-altering meds their pooches were taking to keep their anxiety in check. This made me want a pet of my own so I could take something to get me through the air-conditioned Armageddon our country’s birthday has become.

I used to love fireworks displays. Maybe that’s because they were relatively rare — once or twice a year. But then I grew up during an era of middle-class decorum, the Silent Majority days so roundly disavowed as square and conformist by romping stomping Baby Boomers and their Millennial offspring. In those bygone days, festivities were garnished with sparklers and the occasional crackle and pop provided by a firecracker or two. Cherry bombs were about as heavy as things got since they, along with hot rods and ducktail haircuts, teetered recklessly on the brink of what was quaintly known as juvenile delinquency.

Those were days of inconspicuous consumption, when “showing off” was gauche. Now it appears that making a spectacle of oneself can be a form of noblesse oblige. It’s not just towns and cities that put on fireworks displays. A plentitude of local Gatsbys are eager to light up the skies for the benefit of, well, everybody with ears. Many of these displays are professionally managed (make that expensive) shows. Walking the beach on July third we saw a wiry guy with the hardbitten look I associate with carnies arranging rows of explosives in the sand. We watched his handiwork through the trees from our porch; several more local enthusiasts saw fit to launch their own aerial bombardments the night after that.

I’ll say this: when it comes to fireworks, size really does matter. Made you feel kind of sorry for the guys whose rockets’ red glare didn’t quite measure up.

Be that as it may, President Biden promised we were going to be able to put COVID far enough behind us to celebrate like normal on the Fourth of July  — not that we needed a President’s permission to blow a few holes through a summer night or two or three. It’s what we do. Make like we own the future. Tranquilize our dogs and turn up the air-conditioning.