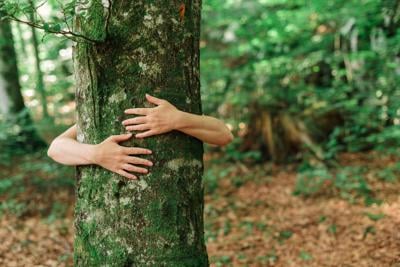 Trees are terrifying.  They’re really tall.  They sway in strong winds.  Though in summer their leafy green accessories suggest good health and relaxation, don’t let them fool you. Once the weather gets cold those green bits wither and die, forcing homeowners up from their couches to rake and blow (or pay someone else to do it).

And this happens every damn year!

I live among trees.  As I write this, I can look out my window and see oak and maple, dogwood, sassafras and a lone conifer — our wizardly Norway Spruce. It’s a community, with an underground network of roots that absorb rainwater, hold our sandy soil in place and, according to some who study such things, may even communicate with one another in ways subtle and marvelous.  Their canopy, which helps cool our house in summer, is so extensive it’s difficult to see our house from overhead.  Satellite reception, we’ve been told, is practically impossible.  No Direct TV.

Living among trees like this puts things in perspective.  It’s like being a garden bug.  The plants in this garden can be tall as a three-story building, their stems so big you can barely wrap your arms around them.  Instead of looking down all the time, having dominion over all you see, you find yourself looking up.

Maybe this is where the trouble starts.  Many members of our species (people, that is) like having the upper hand.  Being in charge.  Having things under control.  Trees do things, whether we like those things or not.  If they have leaves, they drop them.  Seeds also — in summer, cottonwoods — those monumental tree clusters that demarcate the line where the shore turns into duneland — produce a blizzard of white puffy stuff that gathers in shoals on roads, yards and, most annoyingly, unprotected gutters.  Booughs, as the lullabye reminds us, break.  Trees that fall in the forest most assuredly do make a sound: a report, like a shotgun blast, sudden, loud and unnerving.

Trees, of course, are commonly known to be pretty.  As the poet Joyce Kilmer wrote: “I think that I shall never see/ A poem lovely as a tree.”  Folks from the city and suburbs typically remark on how relaxed all the foliage makes them feel.  Green is healthy, right?  Some of these visitors like it so much they buy or build homes for themselves here.

And suddenly trees are a problem.  They’re too shady.  They block the view.  Some trees, it turns out, are just “junk.”  They could fall on the car, on the roof, on the kids.  On grandma!  And those roots…like tentacles; the unseen enemy.  Action must be taken.  Before you know it, guys are pulling up in trucks and revving their chainsaws.  It takes less than a day to bring down a tree that’s held its ground for a century.

When we moved here, we invited an arborist to come and tell us about our trees. He told us something interesting and, so far, it has proved true.  He said the trees would actually protect us from straight line winds and storms that come across the lake.  The number and density of our trees, he said, would absorb the blow.  It’s when you thin them out, creating space between, that things get risky.

This reminds me of neighbors we knew. They came from the suburbs.  Wanted to garden the way they gardened there. Three trees were on their lot; they cut down two. For the sake of the flowers.  For safety.  Then a storm blew down the third one, causing property damage.