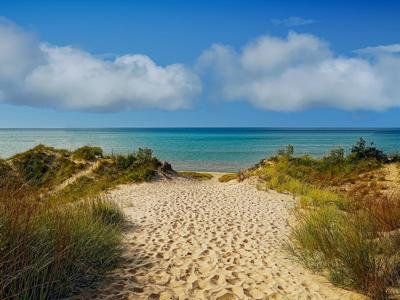 It seems too soon for summer to be over. After months of wildfire-induced haze over Lake Michigan, then a run of days where humidity spiked to rain forest levels, the air is now so crisp and blue it feels like it could whiten a smoker’s teeth.

But the seasons have a timetable of their own. Sure enough, on August 31 winds, which had been blowing subtropical air up from the Gulf, turned and started coming down the lake. We had the windows open and the sound of waves racketing against the shore’s stony shingle woke me in the middle of the night.

I’ve found most people who live here year ‘round will tell you September is their favorite month. The water is still warm enough for swimming and the beaches are practically empty. This summer our beach has been more spacious than we’ve seen it since 2013, when the lake hit its lowest ebb. Since then it’s been steadily encroaching on the shoreline, taking hungry bites out of foredunes and threatening the houses of those beachfront homeowners reckless enough to plough their foredunes down.

Those folks have cause for concern. There are newspaper photos of houses that, in years past, have fallen in the lake. If none have been lost in this latest round, perhaps that’s because whole sections of what once was beach have been turned into construction sites. Big earth moving machines are planted like public sculptures along the road in these parts — so familiar we hardly notice them anymore. It’s a little boy’s dream.

Those machines have been instrumental in piling up revetments of rocks and boulders intended to hold back the lake. Now people venturing into the water find themselves stepping on unforgiving protuberances beneath the surface that didn’t used to be there. I was surprised, while playing a dunk and splash game of frisbee with my son, by how often I found myself landing not on Lake Michigan beach stones, but half-buried hunks of rock. Drift from other peoples’ worries.

I have yet to hear a definitive explanation for why the lake has so suddenly retreated. Though the its cycles of rise and fall are well-documented, the rapidity of what started happening after 2013 was alarming and expected to continue for at least a while. Lake levels in Lakes Michigan and Huron rose four feet during this span. People went so far as to talk about building off shore concrete islands to divert currents and soften the impact of storms.

But water levels in Lake Michigan and its sister Lake Huron are now 20 inches — almost two feet — lower than they were last summer. That’s a lot: one inch of great lake equals roughly 800 billion gallons of fresh water according to a report on the MichiganLive website. The 20 inches we’ve lost this year comes to 16 trillion gallons, or the amount of water they use in England during a single year.

Yesterday we went to the beach to watch the sunset with our niece’s family, including their little daughter Maya. Watching Maya get her feet wet, throw stones (the true beach variety), scamper barefoot and roll in the sand reminded me that whatever else changes, the beach’s magic is still the same.