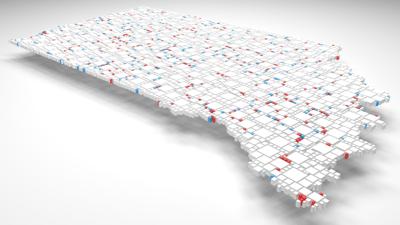 On May 3, Governor Holcomb launched READI (the Regional Economic Acceleration + Development Initiative). It’s a $500,000,000 program for Indiana regions to attract and retain talent (people) who value “Quality of Place and Quality of Life,  Innovation, and Entrepreneurship.”

That’s all very with-it, stylish, and in keeping with the thoughts of today’s thought leaders. But there can be no claim Indiana is thinking outside the box.

The program was placed in the hands of the IEDC (the Indiana Economic Development Corporation). By the time of the launch, the expectations had been set, the course charted.

First order of business: multi-jurisdictional regions were to draw their boundaries by July 1. The regions needed to form teams of private and public entities which would develop lists of long-term (five to ten years) initiatives to meet the objectives of attracting and retaining talent. Those projects would be funded by a match of four public or private dollars for every dollar of state money.

And all of this is to be “data-driven.” As far as I know, intercounty relationship data are available for commuting only, and arguably for income tax purposes.

In the new world of READI, any two consenting counties may join together in holy regionalism. It’s a return to the laissez-faire regionalism of Governor Otis Bowen (1973-81) when regions were allowed to be as small as two counties.

In the 1970s, Indiana had hospital, library, economic, and state planning regions among other configurations. That’s when we learned regions are ephemeral bureaucracies that change purpose, boundaries, and personnel as funding changes.

With the more recent Regional Cities Initiative, LaPorte and Madison counties held membership in two regions each. READI has declared no county may be wedded to two separate regions. Puritanism returns to regional delineation.

Regions are very difficult to define and IEDC gives no real guidance on this first of many eligibility requirements for state aid. What about “regions” with common interests or conditions?

How about a region of Ohio or Wabash River communities? A region of poor townships? A region of counties with significant college populations? Liked working with like.

These bonds of similarities might be more meaningful and more successful than our previous regions based on economically dissimilar, but contiguous counties.

IEDC and the Department of Commerce each have new executive leadership. Perhaps these two gentlemen could put the brakes on this roller-coaster before it climbs too far along its tracks. Perhaps they could rethink the course ahead less hurriedly and more thoroughly.