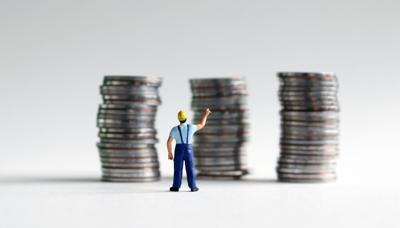 The minimum wage discussion is remarkably complex. The Biden administration has proposed a gradual increase from the current federal minimum of $7.25 to $15/hr. The word gradual has been ignored by critics who would have us believe that a radical, sudden move is being made to $15.

* The minimum wage is the lowest rung on the wage ladder. The lowest ten percent of private-sector workers earned $10.06/hr or less in 2019. The median private sector worker earned $17.64/hr and the top ten percent were up at $46.64 or more.

These four facts indicate we already have a flexible system, adjusting the minimum wage to individual state circumstances. Then why do we have to raise the federal minimum wage?

The answer is embedded in another question: What is the purpose of the minimum wage? That purpose is twofold:

1. to provide all workers with a wage sufficient to support themselves at a basic level of health, safety, and comfort, and

2. to end various supplemental benefit programs for the working poor.

The current $7.25/hr minimum does neither.

An increase in the federal minimum is necessary to overcome the reluctance of 21 laggard state legislatures to recognize changes in economic and cultural expectations.

Typically, legislators are ensnared by small businesses which pay low wages because their market size does not accommodate upgrading facilities and compensating workers at contemporary standards. These businesses have great cumulative political power.

In addition, legislators have to trust people to provide for themselves both in the present and the future. Neither Democrats nor Republicans have such trust. Libertarians, those irrepressible idealists, believe people will make mature decisions.

When wages are low, workers live from paycheck to paycheck. Yet, we could raise hourly wages for the lowest ten percent of private-sector workers by $2.31/hr (23%) immediately with one simple change.

How? Employers pay for employee benefits  (pension plans and health insurance, for example). Slowly we are seeing this practice from WWII disappear. Companies cannot be allowed to stop paying the money managers and insurance companies without putting equal amounts in the workers’ paychecks. That money must increase workers’ pay so they can allocate those funds as they choose. It’s not an adequate solution, but a step in the right direction.

Workers might prepare for tomorrow if they were paid adequately today. Tomorrow, however, is still a luxury, even at $15 per hour.

Dean Whittaker is a leading economic development practitioner. Via his company, Whittaker Associates Inc., he introduces communities to advanced thinking about realist opportunities. Dean is our guest on this week’s Who Gets What? podcast available at mortonjohn.libsyn.com