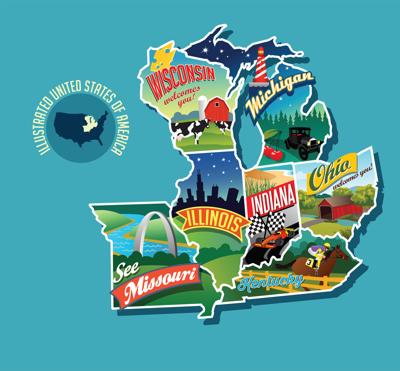 Where are all these new people coming from? Throughout Indiana, folks are asking this question. Now we have answers covering the last half-decade (2015-19) from the American Community Survey. After gathering data from 17.7 million (15%) of 120.7 million households nationwide, the Census Bureau offers the following information:

1. Of the 6.6 million Hoosiers one year and older, during the years 2015 to 2019, 85% (5.6 million) were living in the same house as a year earlier. Of those who did move to a different house, one-third stayed in the same county. That means 91% of the people living in Indiana did not change counties in that five-year period.

3. Alert, foreigners! What kind of foreigners are we talking about? These were people who lived the year before in a foreign county, with half of them in Asia. Nearly 4,000 lived in Europe and 3,000 each in Africa or Central America. Some may have been Americans return home after a stint abroad.

4. Where are all those immigrants we see daily on TV? Few, if any, were living in Indiana. We are not a primary state of entry where newcomers stay as they get their feet on the ground. Recent foreigners in Indiana are likely to be students or others who had Hoosier contacts before entering the county.

6. Why did 171,900 people move to Indiana? That question is not part of this Survey. Commonly, we believe family is a primary factor - - two groups: a) children returning to or for their parents, where they grew up, and have high school friends, an identity, and b) grandparents seeking time with their children and grandchildren). Others move in because of schooling or job opportunities. Some imagined concept of Hoosier wholesomeness might play a role in some decisions.