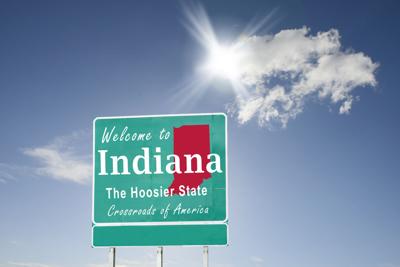 As you probably heard, Indiana is looking for people. Not just any kind of people, but the right kind of people. Educated, skilled, mobile folks. We may not really know what they want, but maybe we could figure out how to find them.

From what we believe to be true, educated and skilled people are highly mobile, moving to the growing places where there are opportunities. Remember, our efforts must be “data-driven” to satisfy what the state is asking of regions seeking part of that tempting half-billion-dollar bucket. This suggests we look where large numbers of people have been moving from other states.

Sadly, we’ll have to wait for the 2020 Census in its full, great detail, state-by-state, even metro area-by-metro area. That’s two, maybe three, years away. But we do have the 2019 American Community Survey (ACS) which might be a good proxy for our purposes.

Wyoming, North Dakota, and Alaska had the highest percentages of their 2019 populations from other states, but the numbers of persons were low. You don’t go hunting where the herd is small.

Yet there is another consideration. The Hoosier state drew over 150,000 to our state, but we realized a net gain of only 9,000 as 141,000 persons left this “State That Works.” Perhaps we need to consider those states that had major net inflows of inter-state movers, plus those states with major outflows from Indiana.

Four states (New York, California, Illinois, and New Jersey) had the greatest net inflow of interstate movers ranging from 185,000 to 80,000. Add to those, four states with major outflows from Indiana: Florida, Ohio, Kentucky, and Michigan, ranging from 18,000 to 11,000.

(Illinois and Indiana exchanged a total of 53,000 residents with two-thirds of those persons coming to the Hoosier state. Illinois led all states sending residents to Indiana and was second only to Florida in receiving Hoosiers.

Florida and Texas are excluded from consideration because both states had net outflows of movers despite receiving much attention for their inflows of retired persons. Maryland is a good candidate to replace Florida.)

So there we have it: the data drives us to understand  Indiana’s regions should be looking to lasso those educated, skilled persons and their families from our four surrounding states and four coastal states.

What will entice these prize persons? That’s the half-billion-dollar question. It might be superior education from Pre-K through 12th grade. Or upgraded housing that replaces rundown dwellings. Certainly, high-speed internet everywhere. And particularly, employers and legislators who have emerged from the mid-20th century.

Clayton Taylor, who served as Vice President of Production at WFYI Media, is this week’s guest on Who Gets What? Listen as he takes us behind the camera and microphone for thoughts on changes in media presentations.

You’ll find Who Gets What? at mortonjohn.libsyn.com as well as at your favorite podcasting nexus.