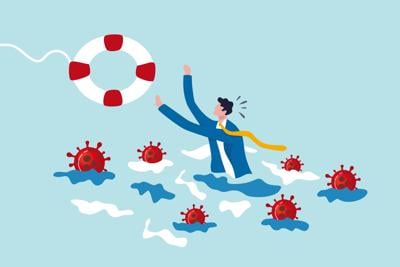 There is a special place in my heart for journalists who write about economics. They accept the doubts as well as the dogmatism of economists. Take this passage from The Economist magazine (12/12/20) concerning the aftermath of the stimulus money put into the U.S. economy to counter the effects of Covid-19:

“The private sector will thus find itself flush with cash as vaccinated economies reopen.” Strange. Aren’t businesses and households on the rocks with inadequate stimulus money to make them whole, let alone “flush with cash”?

“Households and firms may remain cautious, sitting on their accumulated savings. But amid the joy of reopening they may instead go on a spending spree, making up for all the time not spent in theatres, restaurants and bars during 2020. (Emphasis added)Split the difference: maybe a cautious spending spree? Maybe not.

“That would result in a lot of money chasing goods and services that might not be in ample supply, resulting in a period of inflation…” Already I can see the editorial cartoon with cash running in pursuit of scarce goods and services. Yet, it is precisely theatres, restaurants and bars with unemployed workers and empty facilities. Hardly the setting for inflation.

Are returning workers going to see their wages increased? Are new and reopening firms going to pay their suppliers more than before Covid-19 and charge patrons higher prices?

Some numbers might help. In the second and third quarters of 2020, Americans received a $3.4 trillion boost in unemployment compensation combined with those famous $1,200 checks for each person. Here in the Hoosier Holy Land that boost totaled $53.7 billion.

Some might say, “Over 75 percent of the stimulus money was wasted. It was beyond what was needed to replace lost wages and salaries.”

We must reply, it wasn’t wasted. It was spent on TVs and streaming services, larger homes, new cars, home furnishings, remodeling and lots of other things that kept tens of millions of Americans employed and earning.

We cannot deny the crushing economic hardships endured by many households. But most households did not suffer significant financial difficulties during the pandemic. Now, with the pandemic raging again, sustaining the stimulus is vital.