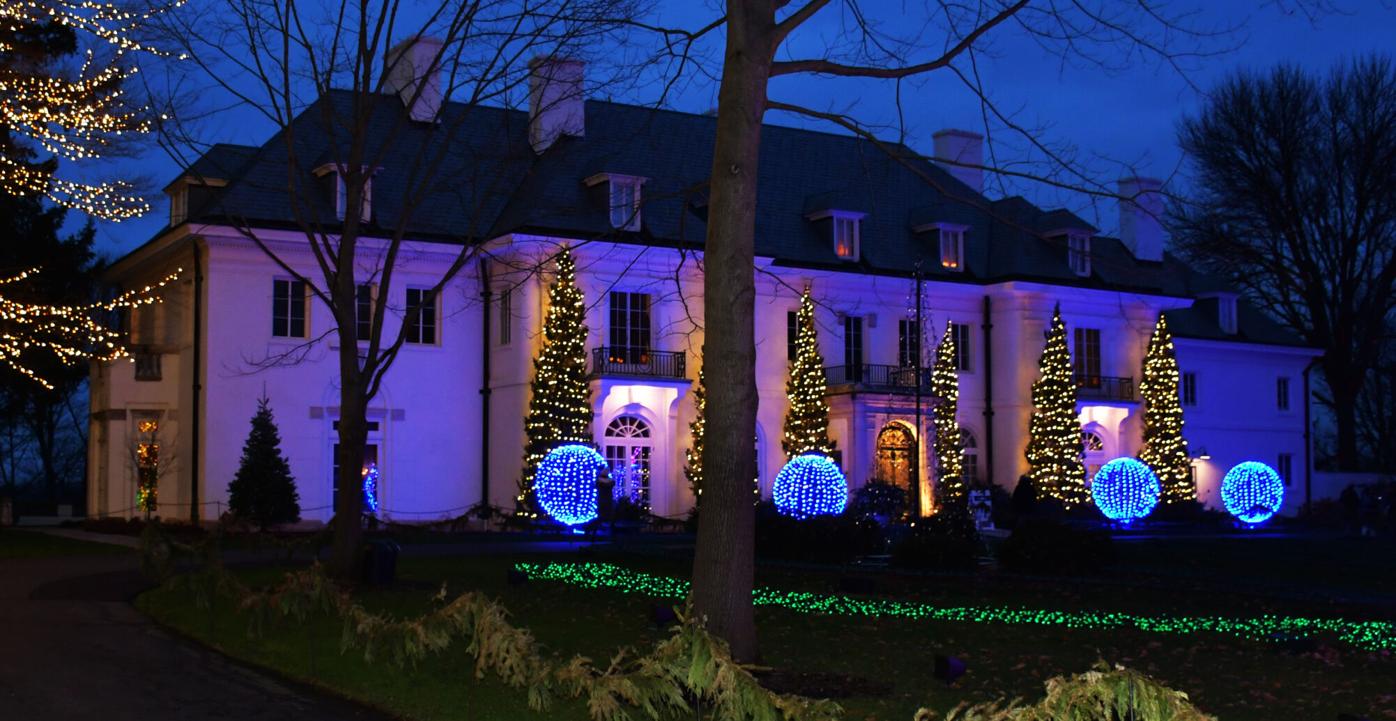 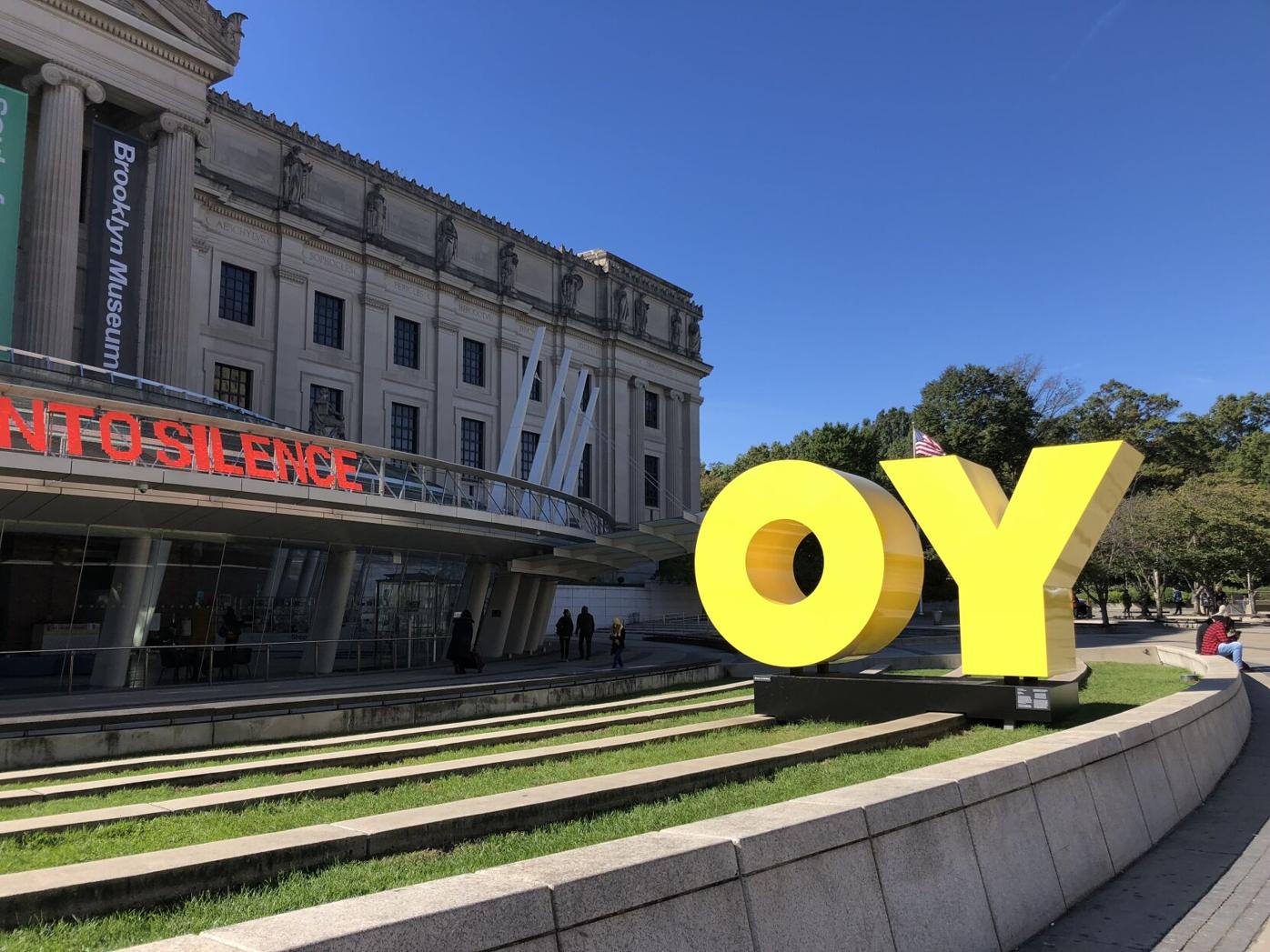 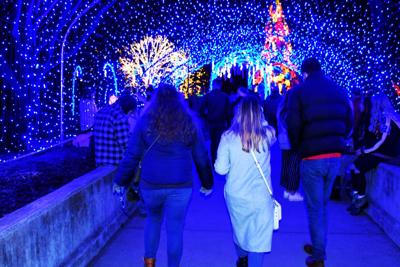 Hanukkah has been a time of high anxiety for me as I struggle to limit my consumption of election-related news. Last Saturday, Proud Boys leader Enrique Tarrio tweeted a photo of the White House, tweeting out his invite to an "undisclosed location". While the tweet seemed to suggest that the White House had invited him, this wasn't the case. But who would have trouble believing it after so many Trumpian attempts to subvert democracy? Not me. Trump has put the OY in my HanOYkkah.

Add to that the anxiety of trying to keep my family, and myself, clear of COVID-19.

So it was a welcome distraction to receive an email inviting me to the “Latkes and Lights” program, at Newfields, from the Jewish Federation of Greater Indianapolis (JFGI). It was, in fact, billed as a Hanukkah takeover of Newfields’ Winterlights. Since Winterlights is essentially a Christmas tree lights show —   a million and a half lights with synchronized musical elements on museum grounds —  I wondered how this thing would go.

JFGI's Senior Director of Development Michael Skolnick had no doubt that this Hanukkah takeover was a mitzvah (Hebrew for good deed). It was while collaborating with Newfields on a virtual event earlier in the fall when one of their staff proposed a partnership with the JFGI.

“Given the world that we live in today, we're looking for an opportunity to have a safe event for our community where people can come together and be socially distant and they'll be able to celebrate,” he told me.

Skolnick and I had been talking at the Winterlights entrance. The line of masked patrons stretched the length of the parking lot. It was sold out.

I wondered at the proportion of Jews to Gentiles in the line but I didn’t have my Jewdar on. I considered calling my second cousin Nate Silver of the 538 blog out here and doing a random sample study to find out. I’m kidding.

What does a Hanukkah takeover mean, exactly? In this case, it meant a coordinated light show to “Ma’Oz Tzur”, a traditional Hanukkah song.  It meant two traditional Jewish Hanukkah foods, latkes (potato pancakes) and sufganiyot (jelly donuts) available for tasting.

Hanukkah, like Christmas, has been thoroughly Americanized and commercialized. Hanukkah was a minor observance before Reform rabbis got a hold of it in the 19th century. They realized that the waves of Jewish immigrant children hitting American public schools, distracted by all the Christmas lights, might get turned into goyim.

That wasn’t really wasn’t much of a concern in my family, which was stridently secular.

In my family, growing up, my dad usually bought Christmas trees and called them Hanukkah bushes. He didn’t even bother to take a chainsaw to the top branches.

Is this what Judah Maccabee and his crew fought for in his war against the Syrian-Greek Empire? Our rabbi asked my mom some version of this question during my brief stint in Sunday school at the Indianapolis Hebrew Congregation. My mom got mad, and we switched temples.

My family wasn’t so secular that we didn’t have a menorah —  a candelabra with eight branches and a central socket. On each night of Hanukkah, you light one more candle until all the sockets are filled. The point is to recognize the Jerusalem temple’s rededication, when the Maccabees only had enough oil to last one day. Just like the oil miraculously lasted for eight days and nights, Hanukkah lasts for eight days and eight nights.

Judah Maccabee is a problematic figure for many Jews: He was a religious zealot fighting his fellow Jews who wanted to assimilate into Hellenistic (Greek-influenced) society. It’s probably not an oversight that the books of the Maccabees aren’t even in the Hebrew Bible. The controversy is echoed today in the tensions between various groups of American Jewry —  Orthodox, ultra-Orthodox, Reform, secular —  that bicker over various issues, especially Israel and support for Trump.

While the overwhelming majority of Jews voted for Biden —  77%-21% according to a GBAO Strategies for J Street Poll conducted Nov. 4 —  that support is essentially reversed in the Orthodox Jewish community. FYI: Orthodox Jews aren’t supporting Trump because Jared Kushner is his son-in-law (although that can’t hurt). They’re doing so more because of Trump’s uncritical support of Bibi Netanyahu’s right-wing government and his moving the U.S. embassy to Jerusalem.

I don’t want to give you the impression that politics was foremost on my mind as I walked around Newfields that night, absorbing the light displays, absorbing the Hanukkah music. (“Shalom Aleichem” was very apropos, Newfields, good job.) Still, all the OY was still weighing my Hanukkah down a little.

But then I turned it around: OY spelled backward is YO —  as sculptor Deborah Kass reminds us. It’s an enthusiastic greeting associated with African American slang. Yo is also the Spanish “I”. It’s an assertive word, filled with as much chutzpah as sufganiyot are with jelly. Many of us, Jews and Gentiles alike, are going to need a whole lotta YO to get through COVID and to make it to Inauguration Day.

The first version of this story incorrectly stated that Enrique Tarrio had been invited to the White House.

Checking out Kafka at the (temporary) Carmel Clay Public Library

Adult Swim at the Children's Museum