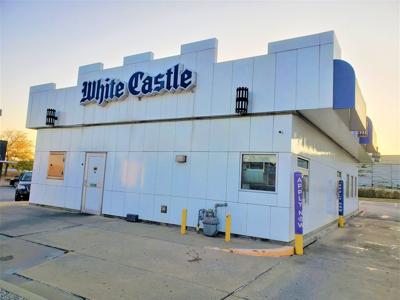 Editor’s note: I wanted to at least acknowledge James Whitcomb Riley who was born on this day in 1849 and is buried on the highest hill in Crown Hill Cemetery. Riley’s sentimental poems for children found a wide audience in their time but I find his verse for adults indigestible. He wouldn’t be the last poet to bank on sentimentality. Somehow I feel that Riley is still with us, in the way that I feel that the last White Castle sliders I had five months ago are still with me (at least in essence: I love White Castle).

Two dudes were talking in their booth in the White Castle at 16th and Illinois while I was waiting for my order at the counter. The older man said to the younger, “Why did you order the Impossible Burger? “I’ve gone meatless,” the younger dude replied. “I did it the day I got my dreads. I want to protect the planet.” Just then a gentleman wearing a frock coat, spectacles, and a top hat entered the establishment looking confused. Walking up to the two men in the booth, he said, “I beg your pardon. I am James Whitcomb Riley and I seem to have lost my way.” The older man looked up at Riley and said, “Jesus, almighty. Ms. Bryson read your poems to us in grade school. 'The Ol’ Swimming Hole', now that was the shit.” Riley looked confused for a moment. Then he smiled and took his hat in his hands. “That always was my favorite to read to the young lads,” he said. “In fact, that was on my list for tonight. I was just going to the theater downtown to read to a mixed audience when I got lost. It is rather urgent that I get back because I am sharing a double billing with Mark Twain.” The older dude laughed. “I’d say that you're about 120 years late for that particular appointment. But you’re in luck today, brother. The time portal on the southwest corner of Capitol and 16th Street is still open. Just stomp three times on the ground and the entrance will appear.” Riley didn’t even bat an eyelash at this. “I thank you most cordially,” he said. He bowed to the men and returned his hat to his head before heading out the door. The younger dude looked up at the older dude and said, “What I just saw there. That was impossible.” The older dude shook his head. “Nothing impossible about these portals,” he said. “They’re as common as smartphones these days. What’s impossible is your burger tasting anything like meat.”