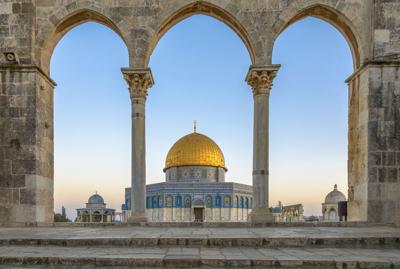 Flashback to April 10th, 2020. It was an incredibly warm Friday. “Thank God it’s Friday” was the thought running through anyone’s head who was happy the workweek was coming to an end. For practicing Muslims worldwide, Friday is looked forward to very much because it is the most important day of prayer for the week; Jummah prayer. If it were not for COVID-19 this year, many Muslims would be eager to go to the mosque and some might have even taken a half-day off work to make sure they had plenty of time to attend the special prayer.

That same day, I was lounging around the house practicing the CDC guidelines, scrolling through my Instagram, and I found a touching screenshot of a tweet:

Today is our special day:Wishing a blessed Good Friday to Christians. May God light up your day.Jummah Mubarak to Muslims. May the Lord be w/ you & your loved ones.And Happy Passover to Jews worldwide. May the festival bring you joy & peace.We are all Abraham’s children.

You probably just rolled your eyes, thinking how obsessed we millennials are with Instagram. The tweet, however, sparked my attention and I felt the need to repost it to my own story right away.

Now, I am not the most devout Muslim nor a very religious person but I have always believed in religious unity and learning about different faiths regardless of what my views or other beliefs may be. After I reposted this to my story, a few friends reacted by “loving” the post which led to a conversation about our beliefs and all of the holidays we each celebrate. It was astonishing to think how similar other religions were to my own and to learn about holidays and observances that were not listed on the American calendar.

Fast forward to today, as we roll into the season known for pumpkin spice lattes and wrapping ourselves in warm layers, we are also approaching a packed holiday season. It is the time of giving, new beginnings, and indulging our bellies with delicious home-cooked meals. Rosh Hashanah, the Jewish New Year, began mid-September and starts the Jewish month of Tishrei.  The Islamic holiday of Mawlid An Nabi was on Oct. 28. Diwali, the festival of lights celebrated by Hindus, Jains, and Sikhs, was last week. Hanukkah, Christmas, and Thanksgiving (although not a religious holiday) are holidays that will be here before we know it and hopefully will drive the light and love that is needed during these taxing times. More than ever this year, the diversity in holidays reminds me just how much understanding of one another we need to be going forward.

Muslims, who practice Islam, celebrate Ramadan, Eid-Ul-Fitr, and Eid-Ul-Adha which are considered the paramount holidays in Islam. Muslims also celebrate the holidays Al-Hijra, Muharram, and Mawlid Al-Nabi, which are more lowkey. Islamic holidays, like Jewish holidays, are determined according to the lunar calendar.

Al-Hijra, observed from Aug. 19-20 in 2020, is known as the Islamic New Year. It is the day that Muslims observe as the beginning of the new year and the first day of Muharram, the first month in the Islamic calendar. Al-Hijra, marks the Hijra (or Hegira) because in 622 CE, Muhammad, the chosen recipient and messenger of God, moved from Mecca to Medina to set up the first Islamic state. Al-Hijra marks the beginning of Islam integrated as a community. Religious rituals may occur depending on each household but there are not really any huge rituals that take place for Al-Hijra or Muharram. As with any other new year though, it’s a great time to form those new year’s resolutions. New year, new me? If the new year’s resolutions didn’t quite pan out based on the American calendar, you get a redo. Who doesn’t love that?

The third month of the Islamic calendar is Rabi in which Muslims celebrate Mawlid Al-Nabi, also known as “Milad Un Nabi.” The holiday, celebrated on July 31 in 2020, celebrates the birthday of Muhammad. Mawlid Al-Nabi is fixed on the 12th day for Sunni Muslims and on the 17th day for Shia Muslims. The day is commemorated with recollections of Muhammad’s life.

My mother enjoys celebrating Mawlid Al-Nabi and does so by gathering with her friends from the Muslim community for a long night of prayer. I have had the pleasure of attending these prayers and I have found the experience to be electrifying because I have seen the devotion Muslims have for Islam, even if the prayers occur in the week hours of the morning.

The meaning of Mawlid is the birthday of a holy figure and Al-Nabi means prophet. This year, Mawlid Al-Nabi is on October 28th, 2020.

There are not too many holidays and observances in the Islamic faith but Islam is a faith that is ubiquitous for Muslims and practiced each day through the 5 pillars that they are obligated to follow.

The most iconic month of the Islamic calendar is Ramadan where Muslims fast from sunrise to sunset for a total of thirty days consecutively. This was the month in which the beloved Prophet Muhammad received the initial revelations of the Quran, the holy book for Muslims. In Islam, fasting is one of the five pillars (or principles) of Islam.

During the thirty days of Ramadan —  which occurred between April 23-May 23 in 2020 —, Muslims do not eat or drink anything from sunrise to sunset. We don’t even drink water! Yes, you read that right. Not even water?

Those three words have become infamous because they are usually the first thought someone expresses after giving an explanation of Ramadan.

During Ramadan, Muslims wake up before sunrise and the first prayer of the day, Fajr. During this time, the first meal called Suhoor is served. The last meal of the day is called Iftar which is served after Maghrib prayer at sunset. Iftars are elaborate feasts because there are many dishes served during this time and a great amount of preparation goes into cooking the dishes. Fasts are broken with dates and in the Muslim household I am from, we enjoy crispy fritters, fruit salads, yogurt/curd dishes, or samosas as appetizers before we have a bigger dish as an entree.

The types of foods that are served during Suhoor and Iftar vary according to each culture. Iftar is usually followed by attending the mosque for Taraweeh, a special prayer during the evening to late at night. This past year, Taraweeh took a virtual platform since the pandemic limited Muslims from attending mosques. During Ramadan, many Muslims will make time to read the entire Quran too.

But why do Muslims fast at all? It is much to put on your health and well-being. For Muslims, fasting is seen as a way to cleanse the soul, to better oneself on a deeper level as a Muslim and human-being, and to empathize with those in the world who are less fortunate. It is about self-reflection and restraint and a time where one deviates from negative thoughts despite abstaining from food water.

And once Ramadan comes to a conclusion, the two most important holidays Eid-Ul-Fitr and Eid-A-Adha are celebrated —  which are basically like the equivalent of Christmas for Muslims but there are two!

Eid-Ul-Fitr is a festival that is celebrated after Ramadan ends. Eid-Ul-Fitr literally means the “Festival of Breaking Fast.”

Muslims dress in their nicest and newest clothes, attend the mosque for morning prayer, decorate their homes, give gifts to children, enjoy spending time with friends and family, and enjoy extensive meals together. For me, there are many reminiscent memories of donuts and Tang orange drink in the big bright orange coolers following Eid prayer as I made my rounds to greet my friends from the Muslim community. In Indiana, there are many mosques now but years ago the mosque where everyone went for Eid was the Islamic Society of North America mosque in Plainfield.

This is also the one day of the year that I gain back any weight that I lost during Ramadan and put on at least a couple more pounds —  not that I’m complaining about it by any means!

Charity and good deeds are always an important part of Islam but they hold a strong significance at the end of Ramadan. Muslims are required to share their blessings by donating or contributing to their mosques and helping those in need.

Eid-Al-Adha is known as the “Feast of Sacrifice.” The story behind Eid-Al-Adha honors the story of Abraham’s willingness to obey Allah (God) by sacrificing his son Ismael but how his son was replaced with a ram right before the sacrifice, sparing his life.

Eid-Al-Adha lasts for three days and it is celebrated differently worldwide, occurring as a finale of Hajj (pilgrimage to Mecca). The three-day festival is also celebrated by sacrificing a goat or any other animal and distributing the meat to friends, family, and the poor. The sacrifice is also done so in a way where the animal feels little to no pain.

The sacrifice represents generosity (giving meat to others), one of the five pillars of Islam, and obedience to Allah.

Our religions, holidays, and traditions may be different but they may also be similar in the sense they are centered around kindness and beneficence. How sweet is it that the holiday you celebrate with your loved ones also includes a conscious thought to help others?

This reminds me of how the homeless population continues to grow and unemployment is still at a high statewide. One of the most fundamental principles of any religion is giving to those who are less fortunate than us and that is a principle we should strive hard to fulfill this holiday season.

Let us, then, keep this principle in mind —  and back it up with our actions —  as we dive into another holiday season, especially one that is during a pandemic and will be quite the cold one.

‘Into the Garden’ at the Indianapolis Art Center

'Barbie You Can Be Anything', now open at The Children's Museum

Murals for Racial Justice: A dive into the artists' minds

You can check out the mural banners w/ your library card.

My name is Hadia Shaikh. I enjoy writing, curating, and organizing community events. I am based in Indy and Chicago. I am very passionate about art and museums. I have a BA in Art History and an MA in Museum Studies