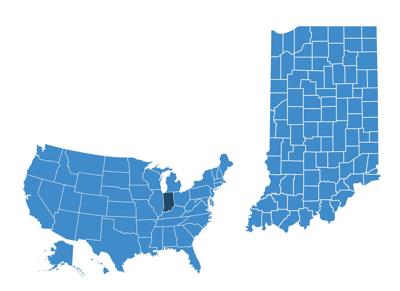 If you missed last week’s column, it was an introduction to Indiana townships. That topic is continued this week and will appear several more times before the year ends.

“Why?” is a very good question. For years, decades, in fact, thoughtful people as well as ignorant people, have said: “It’s time to get rid of townships.” I feel it is reasonable for us to know something more about the subject before we consider any action.

Hence, it’s time you knew the 35,826 square miles of land in our Hoosier state are divided, not only into 92 counties, but also into 1005 townships, four cities and towns which have replaced townships in Boone and Delaware counties, and one small military training facility (Camp Atterbury in Bartholomew County). We will refer to all 1010 units as townships for our purposes.

La Porte County in Northwest Indiana hosts 21 townships followed by Allen Co. with 20 and Jasper Co. with 17. These three counties are also the State’s three largest counties in land area. It makes sense since each county and its townships were set out according to a plan based on the Northwest Ordinance of 1787.

However, nature and local preferences disrupted that plan. Rivers and squabbles about land rights got in the way. If the surveyors had the final say, each of our counties would have resembled Marion County, with nine townships of approximately equal size, arranged like a tic-tac-toe board. (That perfect shape is distorted since Decatur Twp. is squeezed by the White River into 32 square miles, leaving Perry Twp. to enjoy 45 sq. miles.)

If the geographic size is not the determinant of the number of townships, then it must be population. Marion Co., with nearly a million residents, has nine townships. But six other Indiana counties (Crawford, Pike, Spencer, Sullivan, Starke, and Fayette), each having fewer than 25,000 residents, also have nine townships.

Not geographic size nor population served seems to dictate the number of townships. There must be other reasons for Indiana supporting over 1,000 separate townships.

Cynics have suggested the continued existence of township offices, personnel, and the necessary accouterments of functioning agencies (paper clips, staples, telephones, coffee pots, etc.).is a brave effort by our political parties to sustain as wide a network of patronage jobs as possible.

Well! You might believe that, but I would hesitate to put such an idea into circulation.

Liam Price, a Hoosier college student, discusses his achievements this week on Who Gets What? Despite a life-long bout with autism, Liam has become a competitive athlete, a gifted student, and a role model for success. Hear Liam present his story wherever you access podcasts or discover Who Gets What? at mortonjohn.libsym.com