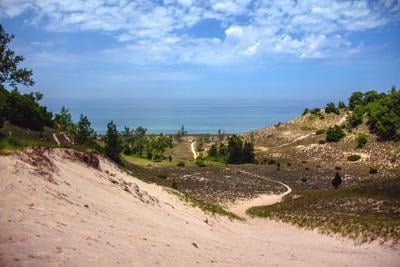 Does anyone still read Carl Sandburg? I ask because until recently I must admit I was among those who didn’t give Carl much thought. Goes to show you how quickly a seemingly unassailable literary reputation can go to hell.

During his lifetime, Sandburg, who died in 1967, was about as renowned as an American writer can be. He won not one but three Pulitzer Prizes; published poetry, journalism, children’s books, a massive memoir and an even more massive biography of Lincoln (more on that in a moment). In his eighties he was lured to Hollywood to work on the screenplay for the blockbuster, The Greatest Story Ever Told and, when he finally died, was eulogized by President Lyndon Johnson, who stood by the casket and said, “Carl Sandburg was more than the voice of America, more than the poet of its strength and genius. He was America."

I was reintroduced to Sandburg by Ron Engel, through his masterful cultural history of the Indiana Dunes, Sacred Sands. Engel recounts how Sandburg was an early adopter when it came to Dune Country, finding his way here from Chicago as early as 1906. It seems he often walked the beach in Miller and became an advocate for the creation of a dunes park.  He fell in love with Michiana, eventually building a house in Harbert overlooking Lake Michigan and putting in a nutshell what many of us who live around the dunes know in our bones: “They constitute a signature of time and eternity: once lost the loss would be irrevocable.”

He said the dunes were the Midwest’s equivalent of Yellowstone and Yosemite. That we have a national park today is thanks, in no small measure, to Carl Sandburg’s choosing to live and write here for almost 20 years.

He called the dunes a “wonderland for creative art and creative pause.” What he saw here, in the juxtaposition of nature with industry, constant movement with timelessness, plant and animal habitats with human settlement was, as Engel points out, a truly encompassing democratic vision. A United States of the Earth.

If you are of a certain age, you may remember Carl Sandburg as an old fella with an unruly shock of white hair and a guitar, which he used to accompany himself when singing folk songs. As quaint. That seems to be the verdict contemporary critics have passed on his  multi-volume biography of Abraham Lincoln. Adam Gopnik recently described it as “crooning” in The New Yorker.

The first part of Sandburg’s Lincoln, “The Prairie Years,” made him enough money to buy the place in Harbert. That’s where he wrote “The War Years,” an exhaustively researched four-volume sacred monster.  I am reading it now — and I’ve got to say there’s no crooning.  What I’m finding is a deep dive into an America gone berserk, torn apart by partisan, regional and selfish interests. A country at a loss for a unifying vision of its own humanity; in which many of its people aren’t even considered human to begin with. It’s an epic, possibly leaning more toward the mythic than the strictly historical. But no less relevant for that — and no less urgent. You read it and realize the time may be different but the place seems terribly familiar.

It took Sandburg over a decade to get this done. His daughter Helga remembered him typing from midnight to dawn. It’s worth remembering he wrote it not far from here.

Midcentury Boy, David Hoppe’s memoir about growing up in suburbia during the 1950s and ‘60s is available from Amazon. “A brilliant, multi-layered book.” — T.L. Needham, Windy City Reviews