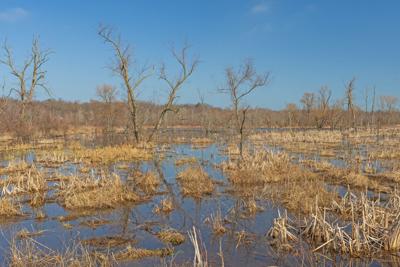 It’s been almost a week and I still don’t get it. Indiana’s Governor, Eric Holcomb celebrated May Day by adding his signature to a bill, SEA 389, that figures to imperil the majority of the state’s wetlands. This wasn’t your usual Business versus the Environment cage match; even the state’s Chamber of Commerce beat this legislative dog.

Holcomb signed it anyway. What gives?

The bill, which is retroactive to January 1, strips state protection from the majority of wetlands found in Indiana. The Indiana Department of Environmental Management estimates that we’ve already lost about 85 percent of our wetlands. They’ve gone the way of the forests that grew here until settlers first arrived.

Like those forests, wetlands have historically been considered wasteland by people wanting to turn acreage into profits. But just as many of us have to come to wish we had more trees to help clean our air and mitigate the effects of climate change, so too with wetlands. We now know that wetlands help prevent flooding, store and purify groundwater and contribute to biodiversity. The prospect of losing what’s left of them — up to 600,000 acres — is alarming.

So alarming, in fact, that opposition to SEA 389 was remarkably wide and deep. Gov. Holcomb himself expressed concern about the bill’s initial draft. Representatives from IDEM and the DNR testified against it, lending their voices to a chorus of more than 100 organizations that included the Hoosier Environmental Council, Save the Dunes, the Indiana Association of Soil and Water Conservation Districts, The Nature Conservancy and the Conservation Law Center.

Kevin Brinegar of the Indiana Chamber of Commerce weighed in. “It’s surprising and very disappointing that the governor signed a bill that is likely to have negative impacts on Indiana’s water quality, flood control and quality of place factors,” said Brinegar. He cited data from the DNR showing that one acre of wetlands provides the equivalent of $248 in water purification services for fresh drinking water, $2,270 in water storage services and $1,055 in erosion prevention services. He pointed out that research has shown that an acre of wetland can store 1-1.5 million gallons of floodwater. Brinegar added, “there will be an increased need for infrastructure funding to deal with increased stormwater runoff and flood control…”

He claimed changes made in the House turned him around, claiming, “I believe Hoosier farmers and landowners will continue to be careful stewards of the land.” An assertion owing more to James Whitcomb Riley’s nostalgic doggerel than actual research.

Holcomb’s cave actually shows where the power in Indiana truly lies: the Indiana Farm Bureau and developers associated with the Indiana Builders Association. According to the Indianapolis Star, SEA 389’s three authors all run companies belonging to the IBA. In Indiana’s state legislature, this is no conflict of interest. It qualifies as expertise.

The IBA says SEA 389 will help make housing more affordable. As it states on its website: If Indiana isn’t a great place to live, work, and raise a family, IBA members won’t be selling many houses. Delivering on the wants and needs of the home-buying public is a challenge IBA’s members face every day and IBA believes that SEA 389 will help achieve those goals…”

As Hemingway wrote: Isn’t it pretty to think so.