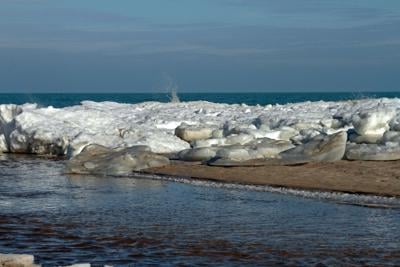 At first the drip-drip-dripping I hear on the other side of my window glass is a little alarming. It is unfamiliar and intimate — a not altogether reassuring combination. Then, in less time than it takes to slap myself, I realize I am hearing the sound of icicles, hanging from our gutters, melting.

Unremitting cold has made this February feel longer than its usual span. The frigid spell lasted only a couple of weeks; it felt like a month. We lit fires, ate to keep warm and washed everything down with red wine. Until the snow became too deep to mush through there were almost daily walks in the woods.

On several of these walks, we encountered our neighbor Ted, cutting vines. Most of these vines are invasive. They wrap themselves around trees and shrubs like great pythons, winding upwards toward the topmost part of the canopy. They contribute to arboreal infections, divert sunlight, and can girdle and strangle trees. In summer, when the underbrush is in full cry, they are practically impossible to get at, so Ted has taken to venturing out with his clippers and saw after everything has died back, cutting the suckers before they get any bigger. He is performing a long overdue public service.

Ted loves to smoke a good cigar while he’s working. On our walks we often caught a whiff of tobacco smoke, hanging like a scarf on an invisible clothesline in the chilly air. The aroma reminded me of going to old ballparks. It didn’t take long; we found Ted, wrapped in muffler and heavy coat, his cap pulled down over his ears. He’d greet us with a samurai grin.

The cold broke at the beginning of the week. Temps rose above freezing and snow gradually started to recede. Ice which drooped, cascaded and hung like curtains from our roofs began making puddles on the ground.

Animals are feeling the change. We see yearling deer, reduced to eating the lousy tasting leaves off rhododendron bushes and holly, actually scampering about. Squirrels are tumbling with one another like acrobats and songbirds have found their voices. It’s like we’ve all been forgiven.

This being the Midwest, though, we have to be reminded that a thaw like this probably won’t last. In this part of Michiana, we know there is a price for everything and this glimmer of wellbeing we are feeling now is bound to bite us before long. Yet look around: yesterday I saw a guy going into CVS wearing shorts! Carpe diem indeed.

It seemed like the woman delivering weather forecasts on a South Bend channel was playing grade school teacher, trying to keep us kids in line. She did her best to remind everyone that this was still February, a storm was surely on the way. Then she showed us a weather map indicating a warming trend that could last for, well, weeks. I thought she looked embarrassed about this. Like she feared somebody might take her green screen away.

I wanted to reassure her, tell her it’s okay. After awhile, intimacy isn’t so unfamiliar.