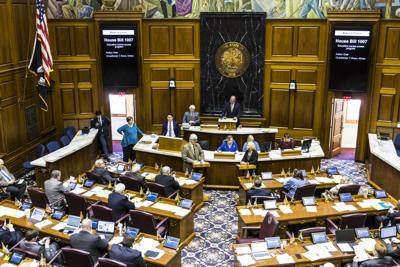 Indiana could be hazardous to your health. If the kangaroo court that calls itself a state legislature here has its way, we could print that on our license plates.

People wondering what will become of the Republican party after the 2020 election need only peer beneath the dome of Indiana’s state capitol, where paranoid notions about freedom and individual rights have coupled with a tinhorn love of the quick buck.

Both tendencies were unfurled last week in the one-party grabfest passing for representative government in these parts. On Wednesday, January 27, the AP reported that Republican Sen. Dennis Kruse, from Auburn, has authored or co-authored no less than three bills aimed at undermining the state’s ability to protect public health. “There’s a majority of the House and Senate in Indiana that like personal freedom and personal choice,” chanted the former auctioneer. “I don’t think that government should be in charge of health care, or intervening in health care in our lives...”

Kruse wants the government to stop “telling me what to do with my body.” It’s a sentiment few of us would disagree with — if, in fact, that’s what the government is doing. Indiana has actually been pretty lenient compared with neighboring states during the pandemic. That’s why so many Chicagoans have been coming here to eat in our restaurants. And quite possibly why our COVID numbers are so much higher than theirs.

The day Sen. Kruse spoke up in favor of everybody doing their own thing in the midst of a plague, the death count from COVID-19 in Indiana reached 9,432. Thankfully, the state’s Chamber of Commerce is standing against Kruse, fearing what his legislation could do to workplace safety.

If only the Chamber would help save us from ruining our environment. That’s what’s in store if SB 389, a bill to repeal virtually all of Indiana’s wetland regulations, becomes law. Sponsored by senators from Jasper, Granger, and Charlestown, SB 389 is a big wet kiss for builders and real estate developers. It has been estimated that Indiana has lost as much as 85 percent of its wetlands since settlement began. What’s left is crucial for water purification, absorption of rains, flood mitigation, and biodiversity. If anything, we need more wetlands, not less.

Rick Wajda, CEO of the Indiana Builders Association, practically wiped the saliva off his cheek when he explained that the IBA has gotten feedback from members, “that have had some challenges with working with isolated wetlands.”  Why save the few marshes we have left when they could all be covered with concrete?

So hooray for Sen. Karen Tallian from Ogden Dunes, one of the increasingly lonely Democratic voices in the statehouse. She put this demolition derby of a bill and its supporters in their proper place, saying, “…this attempt to damage our great state’s beautiful land shows a lack of pride in the public lands our state has to offer.”

Indiana used to be fairly evenly divided between Democratic and Republican officeholders. For every whack job like Dan Burton, there was a Lee Hamilton. The rise of the Tea Party, combined with ruthless redistricting, one of the country’s first Voter ID laws and, last but not least, a supine Democratic Party (John Gregg for Governor? Twice?) settled that. Not even a Republican icon like Richard Lugar was spared the purifying flame of the red waves that followed. What’s left of our government is now so predictable, almost a third of our state reps run unopposed.

That shows you how little pride is left in our state legislature. It’s become a haven for blind faith and greed — which, come to think of it, could fit on Indiana’s next license plate.