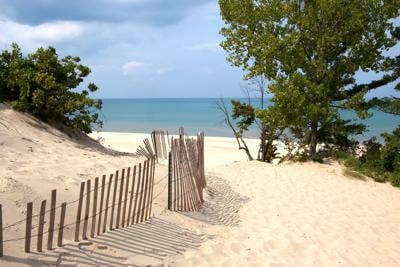 Another lawsuit aimed at privatizing Indiana’s Lake Michigan beaches has been shot down in court.

This latest effort was brought by three landowners in Porter, Indiana, in cahoots with a California outfit called the Pacific Legal Foundation. According to its website, the PLF “is a national, nonprofit legal organization that defends individual liberty and constitutional rights of Americans threatened by government overreach and abuse.” In Northwest Indiana, this has meant supporting well-to-do beachfront homeowners who think that because they can see the beach through their picture windows, they must own it.

The landowners, Raymond Cahnman, Randall Pavlok and Kimberley Pavlok, claimed the Indiana Supreme Court’s unanimous ruling in Gunderson v. State, finding that Indiana has owned its beaches and held them in trust for the public’s benefit since the state’s founding, was a ”taking” — that the government was taking property the landowners believed was theirs.

Never mind that the question of who owns Indiana’s Lake Michigan beaches has already been run through a judicial gauntlet in the Gunderson case, where the public’s right was affirmed at every level. Never mind the aforementioned unanimous Indiana Supreme Court ruling. Never mind that when the U.S. Supreme Court was asked to hear Gunderson, it found no reason to question what previous courts had ruled. And never mind House Enrolled Act 1385, the Indiana State Legislature’s recent codification of the Gunderson ruling.

I don’t know where those folks in Porter got the idea they owned the beach. As with the Gundersons in Long Beach, it seems the privilege of owning beachfront property encourages not so much a sense of responsibility — awareness that you happen to live on a rare and extraordinarily fragile piece of land — as entitlement in some people. They hire people to encourage them in this. Realtors and developers have a history of promoting sales by advertising access to what they baselessly tout as “private” beaches.

But instead of suing whomever, it was that sold them the fool’s gold notion that their property extended to the water’s edge, beachfront owners have preferred to go after the towns in which they reside or the State of Indiana. Rather than take responsibility for their private lack of due diligence, these property owners blame and then seek to undermine the communities in which they live.

In this latest ruling, U.S. District Court Chief Judge Jon DeGuilio disposed of the Porter case with a brevity that should have embarrassed the Pacific Legal Foundation’s lawyers: “Gunderson did not transform private property into public property but clarified where the boundary of the public trust had always existed,” said the Judge. “Without a clearly established property interest in the land, the subsequent state clarification — either by the judiciary or the legislature of where the boundary between state and private property and where the public trust had always existed since Indiana joined the Union in 1816 — cannot be considered a taking.”

Lawsuits like this one make plain how the accumulation of more and more wealth in fewer hands capsizes the social understandings that, among other things, make a middle class possible in this country. As Judge DeGuilio pointed out, there was no “taking” here. If anything, it was the other way round: the court was being used to try and take from the public what law, history and tradition have preserved for our use and recreation. How many more times, I wonder, will we be forced to prove it.