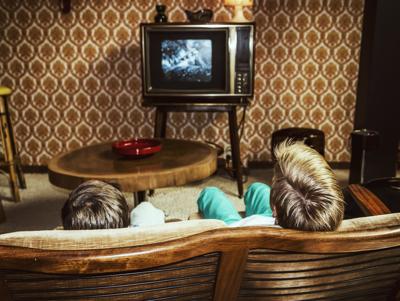 You can’t know for sure the politics of fictional 1960s TV personnel, but you can guess.

The Cartwrights of Bonanza, big freedom-loving Western landowners, lean toward Donald J. Trump and once assured their Chinese cook is safe from deportation, shed their Stetsons for red MAGA ballcaps. Hoss kills a pig and hosts a barbeque at the Ponderosa for the local QAnon organization. Ben and Little Joe attend and become uneasy. Camera fades as the two contemplate a beaming Hoss then look inward in self-evaluation and self-doubt.

Over on The Beverly Hillbillies, Jethro is solidly for Trump, but Uncle Jed Clampett has misgivings and explains his misgivings to Jethro. The dense, jumbo-sized nephew nods as if he understands then says something bold that indicates he totally does not understand, and they flip on the laugh track and cut to new scene: The Capitol, Jan. 6, Jethro smiling broadly and charging up the steps, waving a Confederate flag passed down through Granny’s family.

Barney Fife, the deputy on The Andy Griffith Show, campaigns for the job of chairman of North Carolina Law Enforcement for Trump and doesn’t get it. Sheriff Andy Taylor rebukes Fife for putting a Trump bumper sticker on the squad car.

Mr. and Mrs. Howell from Gilligan’s Island vote Trump (absentee) but keep their politics low-profile because their neighbor Ginger has a sexual harassment lawsuit pending against the president, and it is a small island. Mary Ann says live and let live (and that Ginger was asking for it), Gilligan doesn’t know anything, the Professor is busy, and the Skipper, having himself run a ship aground, is quietly sympathetic to the 45th U.S. president.

On Green Acres, Mr. Douglas is put off by the opinionated mogul. That’s why I left New York (he’d say, exasperated) — to get away from just such people! Mrs. Douglas, however, who loves New York and misses it terribly, hosts fundraisers for Trump. She invites Hooterville’s top people and alienates them with her poor baking skills. Mr. Haney, the salesman, on his door-to-door rounds spreads stories about the Biden crime family. Eb, the hired hand commits to stopping the steal.

June Cleaver looks to Ward for guidance, as does the Beaver — “Gee Dad, Mr. Trump says we’re not going to have a country unless he gets to be president of it.” Ward equivocates and tells them they’ll have to make up their own minds. Wally is apolitical. Eddie Haskell is president of the local Students for Trump chapter.

The Shady Rest, the bed-and-breakfast on Petticoat Junction, lends its lobby as county headquarters to the Trump campaign at no charge, the folks there having gotten to know the president personally from his many stops there — some earrings for Kate, a bottle of scotch for Uncle Joe, and it’s off to the water tower!

A former editor of NUVO and then columnist for The Star, Will is a freelance writer in Indianapolis and finishing a book.