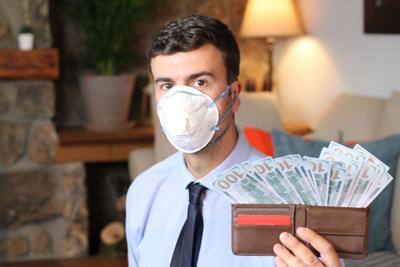 Round two of COVID relief funds have been allocated and billions have been sent out already. Did you get $1,400 for each person in your household? Unless you had less than $80,000 in income ($160,000 for a couple), you didn’t see those checks.

“I don’t need that money,” says a friend in Elkhart over our statewide Zoom connection. He’s right. But what harm is that money doing? If he doesn’t spend it or give it away, the money won’t just sit in his bank. The bank will lend to people, businesses, or state and local governments to spend according to their opportunities and needs.

“Won’t the U.S. have to raise taxes to pay off this new debt?” demands a college student in New Albany. “We’re going to have to pay it back, with interest, some day. It’s putting a future burden on my back.” Pay it back to whom, when? From whom was this money borrowed? No foreign country or domestic investor lent this money to the US Treasury.

This money is only an electronic entry in the ledgers of the Federal Reserve System. There is no increase in conventional debt and no interest to be paid to holders of such debt.

“Won’t it cheapen the dollar abroad?” asks a woman in Sullivan. No. The world is in a massive recession. Our dollars will be welcomed by nations exporting to us and greeting us as Covid-safe tourists. Our stimulus will perk up their economies.

“We are in danger of a massive jolt of inflation,” declares a participant from Monticello. Where’s the evidence? Stimulus round one didn’t give us economy-wide inflation, except in limited corners of the economy.

“Housing! Timber! Gasoline!” counters a gentleman from Toad Hop. Yes, housing demand jumped when some people started working at home. They wanted more or different spaces and were able to afford mortgages with low interest rates. This demand for new structures or remodeled existing homes caused timber prices to rise. It’s evidence the initial relief funds did as intended; it helped many workers to get or keep jobs.

Oil prices are a different story. They’re dependent on the needs and whims of a few nations with price increases following severe price declines.

“This new stimulus money will be wasted on frivolities,” comes a cry from Hobart.

“It’s a communist plot to undermine capitalism,” insists one conspiratorial voice. The next visionary Zoomer affirms, “It’s a capitalist plot to increase consumption and undermine socialism.”

I suggest to the group we now leave this session and our preconceptions, turning instead to what we observe personally, not just gossip disguised as news. As a last resort, we might see what the available data tell us.