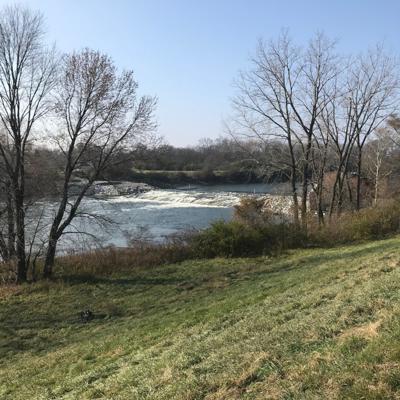 With its recent quiet and unilateral decision to build a rock ramp dam across the White River in 2021, Citizens Energy Group, which now runs the Indianapolis water system, may have opened up a battle royale over the future of the river.

I hope there will be a vigorous public discussion of Citizens Energy’s plans for our river, and I also hope this discussion will consider the White River not simply as a system for providing drinking water and handling sewage, but as an integral part of the social, political, economic and environmental fabric of our city.

Citizens Energy’s decision to build the rock ramp dam came as the result of a cascading series of causes and effects. As part of its “Flood Damage Reduction Project” in Indianapolis, the U.S. Army Corps of Engineers had a gate built across the canal, just upstream from Butler University, that could be closed in the event of a flood.

But these plans to keep water flowing in the city were disrupted by the breach of the Emerichsville Dam south of 16th Street in October of 2018. The Emerichsville Dam, a low-head dam that allows water to flower over its top, was built in 1899, and it made the portion of the river upstream from it deeper, slower and wider. Most notably, a wide stretch of the river, known as Lake Indy, at around 25th Street between Riverside Park and Coffin Golf Course, was the direct result of Emerichsville Dam.

With the breach in the dam, the White River became much lower, and it flowed more sporadically through the Riverside area than it had for the previous century. Some began to refer to the White River as a creek. Lake Indy virtually disappeared. And the demise of the dam meant there was an insufficient pool of water to feed the intake station that Citizens Energy had just built.

Initially, Citizens Energy tried to repair the dam. According to Dan Considine, manager of corporate communications, “Citizens [Energy] and the City of Indianapolis made extensive efforts to repair the dam, but the damage to the structure was beyond repair and about one month after the initial breach, the entire structure failed.”

After a period of study within the company, Citizens decided to construct a new rock ramp dam. Unlike the previous low head dam, this rock ramp dam would not form a solid wall, but would instead be a system of rocks that would allow water and fish to flow through it.

As part of the study, Considine says, the company identified five possible sites for the new dam and came to prefer a site just north of 30th Street, near the new intake station, as the easiest and least costly option.

In response to neighborhood concerns, though, the company is now also considering a site nearer to 25th Street, which would cost slightly more but would restore part of Lake Indy. The company is not considering placing the new dam near the Emerichsville Dam because that would be too expensive.

As I write this, on Feb. 12, 2020, Citizens Energy has not made any public announcement of its plans. Instead, it has met representatives of neighborhood organizations in the area, and it will continue to hold such meetings.

Circulation of Citizen Energy’s plans has inspired a movement within the Riverside community either to restore the Emerichsville Dam or to construct the new dam near that site in order to increase the flow of the river through the Riverside area.

Two residents of the area, Derek Tow and Ronald Rice, spoke of their concerns on a show on WRTV channel 6 on Feb. 11. They also created a Facebook page entitled “Keep the River in Riverside” to rally support for their position. (The group’s FB page now includes a link to a petition calling for the reconstruction of the Emerichsville dam.)

As part of their argument for restoring Lake Indy, or something like it, Tow and Rice point to the recently completed Riverside Park Master Plan. In one of his Facebook posts, Tow says this ambitious plan depends on having a “usable river,” with the implication that the Citizens Energy plans would render the river unusable.

I have three distinct and contradictory responses to these developments. At the risk of trying the patience of my readers, I want to lay out all three.

On the one hand, I do not want us to allow anything to interfere with the progress of the Riverside Park Master Plan. This plan takes in more than 800 acres of public land along the river, and it could help the park live up to its potential to become a treasure for the entire Indianapolis community.

Moreover, I think we must restore Riverside Park as a step towards social and racial justice in our city. I say this not simply because the Riverside Park area is largely African American, but also because the former private Riverside Amusement Park, north of 30th Street, was a notoriously racist institution, and the public park itself was off-limits to black citizens until the 1960s.

And, for the past 50 years, the Riverside area has been neglected and abused.  We can make a modest step toward a more just community by improving Riverside Park and making it more accessible to all citizens.

On the other hand, however, many of the claims of Keep the River in Riverside seem exaggerated and quite possibly shortsighted. The standing headline of the Facebook group states, “The River Will Be Gone Forever Unless DPW & Citizens Rebuild the Emrichsville Dam.”

While it is perhaps possible to bury an urban stream, no one is talking about doing to the White River what was done to Pogue’s Run. (For an overview of the history of the stream, which used to flow through downtown but now is buried in an underground channel, see Pogues Run).

In the future, the White River might be different from what we are used to, and it might not be as wide and deep as it once was through Riverside Park, but it will surely persist.

And it will be “usable,” perhaps in better and more sustainable ways. I have occasionally seen speedboats navigate Lake Indy, and it is not a pretty sight - rather like watching someone try to swim in a bathtub. I believe that even under Citizens’ current plans, canoeing and kayaking might be better, and fishing too. The rock ramp dam will surely be an improvement over the low head dam.

On my third hand, though, I wish we were considering the possibility of removing dams altogether from the White River. I understand this is not consistent with Citizens Energy’s plans and would probably be equally unpalatable to the champions of Riverside Park. And perhaps it is impractical, given the city’s manifest need for water.

But as part of this process, I do think we should consider un-damming the White River. Flooding on the Mississippi and elsewhere has shown us that dams can, in the long run, do more harm than good. And if our aim is to restore the White River to something like its original form, removing all dams would be a good place to start.

Beyond the question of whether, where and how to dam the White River, I am astonished that we, as a city, have ceded authority to decide these questions to Citizens Energy.

My strongest sense about this is that this is a political question, and it should be taken up by all citizens of the city, including our elected mayor and city councilors.

While Citizens Energy is, in theory, a “public charitable trust,” they tend to act more like a corporation — which is to say that they do what is easiest, cheapest and in their own best interest, and not necessarily the best interest of citizens of the city.

Moreover, I just don’t think they are in a good position to consider the complex political, social and environmental issues at stake here.

It is certainly true that we ask a lot of Citizens Energy. This company must supply water on a reliable basis to over 800,000 residents of the city, and it must do so without the benefit of a major river of the sort that St. Louis and Cincinnati enjoy, or a major body of water of the sort that serves Chicago and Milwaukee. And we ask them to do this in the most economical way possible.

Nevertheless, our thinking about the White River must involve more than supplying water and removing waste. Of course we need to take into account our insatiable need for water. But there are other ways to do this. For example, Citizens Energy is in the process of opening a massive new reservoir near Geist in a former rock quarry.

Maybe finding alternative sources of water is more costly and time consuming than relying on readily available sources, but it seems to me that we, as citizens, rate-payers and taxpayers should consider taking on this extra cost for a great good.

In short, Citizens Energy Corporation does not own the White River and should not be allowed to make unilateral decisions that might determine its shape for the next century.

The question of what should happen to the White River, for now and perhaps a hundred years into the future, is profoundly political, and it demands open political processes. Such weighty questions cannot be left to the non-public administrative processes of Citizens Energy.

So, while I do not agree with all of the claims of Keep the River in Riverside,

I certainly agree with their assertion that this decision should not be considered in economic terms alone. Apparently, Citizens Energy is unwilling to consider placing its new dam at 16th Street because it would cost more to do so.

That decision is surely short-sighted.

Ratepayers in the city are paying more than $2 billion for sewer infrastructure that should make the river cleaner. If the Riverside Master Plan is realized in any responsible way, it will cost tens of millions of dollars.

In that context, it seems to me, we, as citizens, should consider paying more for a better system of managing the river.

At the same time, though, I wish we also would reconsider our relationship to the river and what goes into our efforts to make it “usable.”

Partly, this means accepting that the White River is seasonal, and it rises and falls with the rain and snow. Even when the Emerichsville Dam was intact, portions of the White River could be impassable by canoe during dry periods.

To restore balance with our natural world, we need a reformulation of Immanuel Kant’s categorical imperative, which calls on us to treat people not as the means to some end, but as ends in themselves.

Let’s think of elements of our natural world, including our rivers, not in strictly utilitarian terms, but as entities that deserve our respect, admiration and stewardship, regardless of how we might use them.

Thus, as we begin this public discussion, I hope we do not confine our deliberations to how the White River can serve us. We need also to ask how we can serve our river.

Watts: On the Cycling Horizon

Stories that prove we live in interesting times.