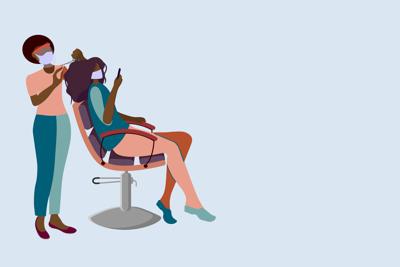 Seeing that the theme of the 2020 Spirit & Place Festival, now in its 25th year, was “Origins,” Patricia Turley figured that her event proposal would be a good fit.

The origin of Turley’s virtual event Beyond the Big Chop —  which focuses on the culture and care of Black hair —  is linked to an episode that Turley experienced as a child. The online event and virtual demonstration will take place on Friday, November 13, 2020, 5:30 -7:00 p.m.

Dr. Turley is visiting clinical faculty and associate director of the Olaniyan Scholars Program at IUPUI.

“I was in middle school, and I liked to have braids,” said Turley, recalling the experience. “And I was in a program at that time, called We the People and my school spoke to my mother and had suggested that I wear my hair a different way before I went to compete with other schools.”

The experience was difficult for her to understand, but one thing was for sure: she was the only person of color in the program.

“My mother didn't change my hair,” Turley said. “So I wasn't able to go to represent my group, represent my school, in We the People. And I thought it was my fault for that. Within as I continue to learn and grow, I realized that it wasn't my fault  it wasn't.”

But that experience led her to wonder why other people were predisposed to prevent her from representing her school. “What does that mean?” she said. “It's not the knowledge that I have that is a concern, it's more of my presence, or how I look. And so that really sparked an interest.”

And her story, which unfortunately is far from unique, resonates with other African American women she talks to. It is also an ongoing area of research for her as an academic.

“We need to know that other folks may feel a certain way about our hair and how we represent ourselves in our culture, and it's not our fault,” she said. “And we should not feel any blame.”’

Part of the problem is the way, according to Turley, is the way beauty is defined in society, and the role models that children compare themselves to.

“There are some girls, they may have beautiful hair, but think that they don't [...], she said. “I think sometimes it's the parents as well; it's it's the family structure, that can also be something that is negative, a negative viewpoint of how girls or even boys should wear their hair [...] to fit into society, not to bring attention to yourself, so that you can succeed,” said Turley. “All of that plays into a role because I don't think that there's one particular factor, but a multitude and a ripple effect of factors that affect children that grow into teens, that grow into adults.”

Despite the resistance Turley encountered in middle school, she continued to wear her hair in a natural style. Others in her family had different experiences. And after having lived for many years with processed hair, she has seen many of her family and acquaintances go through with “the Big Chop.”

“The Big Chop is that moment where you cut your hair and you cut all that processed hair off and start all over,” Turley said. “You cut your hair, either very low or some women cut it all the way off and they go through town where they have shaved their head.  Then it's a process of regrowing your hair without it being processed without it having a relaxer, without having a permanent.”

Turley, who was the youngest of six among her siblings, has seen many of her family members —  including her mother —  go through with the Big Chop.

“Three of my sisters have cut it completely off and started over,” she said.

In “Beyond the Big Chop,” Turley, with the help of hair braider Dawn Blanchard, demonstrates primarily for African American women —  who have chosen to wear their hair in a natural style —  effective ways of caring for hair that does not involve relaxers and harsh chemicals.

But hair care products geared towards tightly coiled hair aren’t necessarily any better than other products.

“It doesn't necessarily mean that it's good for your hair,” said Turley. “Chemicals in your head period. Regardless of what ratio or what type of hair you have is not good for you, especially over time.”

In their demonstration, they use a product made from carrots.

“Just like a dentist may say, what happens to your mouth affects your health, it's the same thing with our hair,” she said. “If I'm putting chemicals in my hair, my scalp is open. And so those chemicals can get into my bloodstream. And they have a greater effect on me, whether it's my thyroid, whether it's messing with my estrogen level, there's a lot of harmful chemicals that are going into your body based on the chemicals that you use.”

Participants who had previously registered for the Big Chop were able to pick up a demonstration kit and share their stories about why they decided to go natural with their hair, Turley said.

“Not only are we going to create things, we're also going to talk about the different products that are in the ingredients to make the creams and oils,” she said. “And why we are using those. For someone who is frizzy maybe they may need to alter the recipes a little bit to accommodate for the frizziness in their hair. Or maybe [...] there's recommendations of different products that they can put in their hair that will rejuvenate the hair follicles and cause the hair to grow.”

So “Beyond the Big Chop” —   presented by IUPUI Africana Studies Program, Indiana Math & Science Academy, F. Jordan, MaryKay, and Unbound Coaching for Life  —  might be, in a sense, an invitation to join in a community.

And that sense of community has been important to Turley, in terms of accepting the choices she has made, including her choice to have a natural hair style.

“The community that I have built around me, that supports me in my endeavors, they have been the ones that have continued to understand some of the differences and struggles that I [have], and have been providing advice and support through the process,” she said.