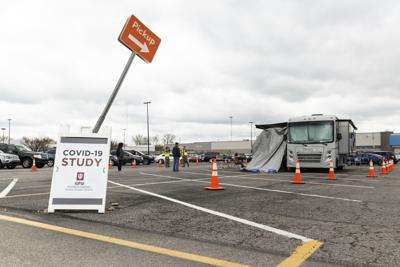 But not all the news on the nationwide, or statewide, level is grim. Indiana is beginning to offer vaccines to both first responders and those over the age of 80. And, according to the Indiana State Department of Health, the state has just received around 350,000 doses to distribute.

At the same time, I see signs that people aren’t taking the virus as seriously as they should.

In Carmel’s downtown, restaurants with patios enclosed by plastic (often a mixture of clear plastic sheets and permeable vinyl) seem to be doing a good business. But eating in such spaces doesn’t necessarily mitigate COVID transmission risk. I wonder if diners feel a false sense of security in such spaces. As the new year began, I also observed dozens of people in bartop seating in the bars, not observing social distancing, maskless.

More and more people I know are coming down with COVID, including a neurologist friend of mine, Dr. Seth Cahn, who practices in a hospital outside Indianapolis, mostly on an outpatient basis.

“The virus really did kick my butt for a while, for most of the two weeks that I was in self-quarantine,” said Cahn, who is married and has two children. (His wife is also a healthcare worker.)

He spent a lot of time in bed during the quarantine.

“There were days when I would get up at some point in the early afternoon saying, I've got to get moving,” he said. “I've got to motivate myself. I'm just gonna get up, take a shower. And once I get moving, I'll feel better. And as soon as I got out of the shower, I just had to go right back to bed. it was impressive and humbling. How much this just completely saps your strength. And the waves of fatigue that I felt, at times made me appreciate what my patients who have narcolepsy go through.”

At first, his symptoms were nonspecific.

“I had a dry cough, and my chest felt a little tight, but I have asthma at baseline,” he said. “So that happens sometimes. “I had headaches, I get headaches sometimes. I had backaches and my back bothers me from time to time and our basement had just flooded so I had spent time tearing out carpeting and moving furniture so I had every reason to have a sore back. But then I also started to get real extreme fatigue and chills.”

Just as he started experiencing these symptoms, he found out that one of his recent patients had just tested positive and he suspects that he caught COVID from this patient.

“I would be bundled up in a sweater and a hat under the blanket the night before I got tested, and that was the moment when my wife said, ‘I'm worried about you.’” he said. “And I quietly thought you know, I am too. So the next morning, he took a test, and it turned out to be positive.

Cahn said he has been lucky to experience just mild symptoms.

“I wasn't asymptomatic, and I'm very annoyed at how my symptoms linger and refuse to fully resolve,” he said. “But three thousand people died from this disease yesterday, another three thousand will have died today, and thousands more will likely have more severe long-lasting effects that we are just beginning to get early hints about.”

Cahn sees a certain irony in the fact that he came down with COVID and not just because he is a physician.

During the pandemic, he has been active on social media dispelling what he sees as the politicization of the virus. He developed a timeline, shared on Facebook, documenting his view that hydroxychloroquine isn’t an effective COVID treatment.

“A lot of people would send me personal messages, saying that I was being irresponsible telling all these people to be afraid of this virus, and telling all these people not to use hydroxychloroquine and zinc, because obviously, they had read so many, so many stories on social media, about what a lifesaver it was, when there was actually zero data behind it.”

When the loudest proponent of the drug, the president of the United States, got COVID-19 in early October, he was prescribed just about everything but “the hydroxy” as he liked to call it. He received an antibody treatment infusion, which is still experimental and involves a course of antiviral drug remdesivir. He also received zinc, vitamin D, aspirin, and dexamethasone, a steroid.

Until the vaccine is widely available, the best thing we can do to attempt to avoid the virus is the CDCs current recommendations, even though there is no way to be 100% safe if you happen to venture out of the house, Dr. Cahn said.

Every day I think about this balancing of risk.

I think about my daughter, who is attending Carmel High School, which is still operating on a hybrid basis. I know there is a significant risk of her catching the virus in school. But I have to balance that risk with the risk to her well-being if she stayed home.

During our conversation, Dr. Cahn offered a metaphor.

“I would compare it to the Homeland Security agents at the airport where travelers are left wondering how much of this is actually keeping me safe?” he said.  “And how much of this is just security theater? Some of it might seem performative at times. And, in part, that's just because there's no way to be completely ... kosher without completely blocking yourself off from society.”

But we should never forget to take proper precautions —  particularly mask-wearing and social distancing, he said.

“The face mask that we wear does not completely block the transmission of the virus, but it reduces significantly the likelihood of getting the infection,” he said. “But it more effectively reduces the odds of spreading the virus to someone else.”

And if you do test positive, answer the phone when contact tracers call.

"That's the one thing people can do to really help stop the spread," he said.