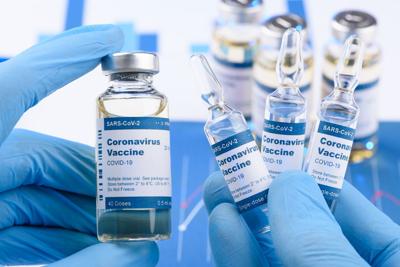 Emily Hartman is an administrative coordinator at Community South Hospital in Indianapolis. After COVID-19 hit in March, she was moved to the hematology-oncology unit, where cancer patients receive chemotherapy.

While helping the nurses and cleaning, Hartman also spent time with a male glioblastoma patient who had a fast-growing brain tumor and was nearing death. His family and friends were not allowed to visit the hospital due to the pandemic, but because of his tumor, he didn’t understand that. So she sat with him for hours talking and trying to explain what was going on.

“There were several times that I just sat in his room for hours and talked to this guy—that was my job,” Hartman said. “But to see his concern, and the nurses would try to explain everything to him, why his family wasn’t coming, and why they weren’t here to visit him.”

Hope is stirring in Indiana as 53 hospitals are currently administering the vaccine to health care workers after its approval for emergency use, according to the Indiana State Health Department. As of Jan. 5, 100,487 Hoosier’s and 4,836,469 Americans have been given the vaccine according to the CDC.

Dr. Ram Yeleti, the chief physician executive of Community Health Network, says about 7,000 of its employees have been vaccinated. Healthcare workers who have already gotten the first round of the vaccine will be receiving their second dose within the next several weeks.  Although it is not a requirement, it is encouraged.

Unlike Hartman, who was vaccinated on Dec. 27, Yeleti has not yet been vaccinated due to having COVID-19 several months ago. He wants to make sure those who want the vaccine have a chance to get it.

According to Yeleti, only six or seven people have had side effects out of the approximately 7,000 employees who have received it. Hartman was among the majority of vaccine receivers who have had zero side effects. In America, 17,020,575 doses of the vaccine have been distributed, according to the CDC.

Up until it was required by her employer, Hartman had never received the flu vaccine and had never given it to her kids. After watching many families come and go in the hospital and seeing the toll that the virus was taking on nurses and doctors, she decided she would get the vaccine if it were available to her.

“To see the added stress that was put on families and patients—because we’ve been in situations where family members are in the hospital or sick, and you have so many questions, and to not be there when the doctor comes in, to not be there to talk to the nurse, you have to do that all over the phone,” Hartman said. “It’s taxing. So I thought, OK, if I get this opportunity to get this shot, I’m doing it.”

Both Hartman and Yeleti recognize there are Hoosiers who are concerned about the vaccine and don’t want to get it. Yeleti advises those people to weigh the risks between the effects of COVID-19 and the shot, and he hopes as vaccinations continue that we will know more about the effects.

Hartman believes that receiving the vaccine is more about protecting and helping others, not yourself.

“I made the decision because I wanted to help other people, not to help myself,” Hartman said. “I don’t want my grandma to die of COVID because somebody just happened to have it and walk past her or be in contact with her. I don’t ever want to have that on my conscience that I’m the person that gives it to somebody else and then they lose a family member.”

Tabby Fitzgerald is a reporter for TheStatehouseFile.com, a news website powered by Franklin College journalism students.