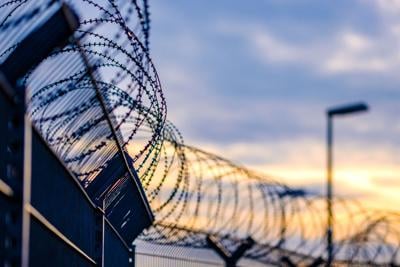 For 41 people incarcerated at Indiana Department of Correction facilities, a prison sentence became a death sentence from the pandemic that has claimed the lives of 7,000 Hoosiers.

Data for the toll on prisons is incomplete, with only totals of deaths and cases since the beginning of the pandemic listed. There is no statewide database on cases in jails. Once the virus enters the confined, crowded areas, the results can be deadly. On Dec. 8, 56-year-old Fred Whitlock died of COVID-19 in Vigo County Jail. Whitlock collapsed while carrying his breakfast to his bunk at the Terre Haute facility.

“In some prisons, like Plainfield, where barrack-style housing with a hundred bunks lined up in one dorm is employed, prisoners have been dying at a rate approximately 400% higher than the general population,” wrote Gerhard Glomm, the father of an inmate at Plainfield, in Indiana CURE’s winter newsletter. There have been eight deaths at the Plainfield facility and 134 positive cases.

Citizens United for Rehabilitation of Errants, or CURE, advocates for lower prison populations and resources for those incarcerated. Indiana’s chapter is led by Suzie Rimstidt, whose son is incarcerated at the New Castle prison. When asked about correctional facility conditions, Rimstidt directed TheStatehouseFile.com to its winter newsletter.

Glomm said Indiana prisons are “hopelessly overcrowded” and calls for early release of inmates to reduce populations. David Bursten, chief communications officer for the Indiana Department of Correction, said no IDOC facilities are over capacity.

A September report shows the department is 8% below operational capacity in adult male facilities, with a larger percentage of leeway in female and juvenile facilities. The report doesn’t mention changes for social distancing and shows low vacancies in the “restricted housing and infirmary” category, which would be used for those positive for COVID-19.

In neighboring states, governors have taken action to reduce incarcerated numbers. Kentucky Gov. Andy Beshear issued orders to release about 1,200 state inmates. Ohio Gov. Mike DeWine let out more than 100 people. But Gov. Eric Holcomb is leaving it to the courts. March through Dec. 3, just 30 sentence modifications have been granted in Indiana. Only a few states have released a smaller amount of their prison population, according to the ACLU.

The state doesn’t need to look far for guidance on how to make prisons safer. A report from prisonpolicy.org explains ways in which the state can reduce the prison population including creating quarantine sites for released inmates, supporting re-entry for released inmates and providing support for prison employees.

The toll of the pandemic at local jails is hard to quantify because information is held by individual county sheriff’s offices.

The death of Whitlock from COVID-19 in the Vigo County Jail led to a protest at the Terre Haute facility concerning the lack of an autopsy and mask wearing at the jail, led by The Reform Movement of Terre Haute.

Sheriff John Plasse said masks are required for staff and recommended for inmates. Vigo County Coroner Dr. Susan Amos said the Center for Disease Control recommends use of a special air filtration system for autopsies of COVID-positive individuals, and the technology isn’t available.

In Marion County jails, public information officer Katie Carlson said there were a total of 304 cases in the two facilities since April. There were seven cases in the two jails as of Dec. 14 and no deaths in the facility. Inmates are still being transferred to IDOC prisons when possible, but the IDOC has placed a limit on the number of daily inmate transfers, causing a backlog.

The American Civil Liberties Union gave each state a grade in June, rating their efforts to prevent deaths behind bars. Indiana was given an F+. Nine states earned D grades, including neighboring states Kentucky and Michigan. No state earned above a D.

The Indiana ACLU did not respond to a request for an updated evaluation of the state.

Across the state line

Peter Debalek, a furniture maker in Ohio, wrote about his experience at Lorain Correctional Institution in Grafton, Ohio for the New York Times. Debalek described cramped quarters, limited communication with family and a lack of information on the growing pandemic.

“It was a completely novel experience. Terrifying and all the ways you can imagine,” Debalek said.

Lorain restricted the movement of people through the facility, changed cafeteria protocol and increased cleaning.

“They had finally done everything they could,” Debalek wrote. “Everything except release prisoners.”

Debalek said despite the precautions, the spread of the virus in a crowded, enclosed space couldn’t be stopped.

In early March, Debalek said, the state had begun testing all inmates. When this yielded an 85% positivity rate at one facility in Marion, the state walked back on this move.

Ohio Gov. Mike DeWine authorized the early release of 105 people from state prison who are nearing the end of their sentence and commuted the sentences of seven people in Ohio state prisons. Holcomb has not taken similar action.

DeWine’s order had tight requirements, such as being over age 60 with a chronic health issue. But Debalek, who was serving a sentence for failing to report to his probation officer, was granted a judicial relief.

Debalek said this highlights the ongoing issue of overincarceration.

“You’re incarcerating, for years, people with minor drug possession charges, nonviolent offenses, you know, heavier offenses just because it’s a repeated offense, even though it’s non-violent, so you have an existing problem of over incarceration,” Debalek said.

There are 19 juvenile detention centers across Indiana. As of Dec. 4, there were between 25 and 50 cases of COVID-19 in these facilities. Josh Rovner, an advocate at The Sentencing Project, a Washington, D.C.-based research and advocacy center working for de-carceration, said populations within these facilities need to be reduced.

“We know that there are too many kids who are locked up in this country,” Rovner said. “The last time that there was a nationwide count, about two thirds of the kids in youth justice facilities were there on what are considered non-violent offenses: charged, or convicted on drug possession, public order offenses, theft.”

There were 294 youths in IDOC juvenile facilities on Oct. 1.

Rovner said these children would be better served in anger management programs or drug counseling that can happen safely at home, away from congregate settings.

Children in juvenile facilities also have a hard time knowing the difference between medical quarantine and solitary confinement.

Rovner said families of children in juvenile facilities have raised concerns about children not reporting symptoms to avoid isolation.

“Do the kids understand that they are in ‘medical isolation’ instead of solitary confinement?” Rovner said. “I doubt it, you know, these are 16-year-olds who are confused and scared.”

States and localities have begun decreasing the number of youth in juvenile detention centers, including the states of Georgia, Colorado and Maryland. Rovner said he hopes this becomes a new normal, where governments realize we have been “locking up too many kids for too long.”

Taylor Wooten is a reporter at TheStatehouseFile.com, a news website powered by Franklin College journalism students.